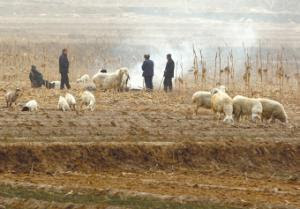 As the celebrations over the success of "team GB" intensify, Michael Sheriden of The Sunday Times gives us another insight into the dark side of the Chinese Olympic "experience".

Thousands of farmers, he writes, face ruin because their water has been cut off to guarantee supplies to the Olympics in Beijing, and officials are now trying to cover up a grotesque scandal of blunders, lies and repression.

Thus, while in the capital, foreign dignitaries have gushed over the millions of flowers in bloom and lush, well-watered greens around its famous sights, just 90 minutes south by train, peasants are hacking at the dry earth as their crops wilt, their money runs out and the work of generations gives way to despair, debt and, in a few cases, suicide.

This entirely man-made (or Chinese government-made) disaster is affecting about 31,000 people around Baoding, a city to the south of the capital. Many are said to have lost their homes or land.

In fact, Sheriden is late to the story. We reported in May that areas were being deprived of water to feed the Olympics. But the news agency Reuters was even further ahead of the game, running the story in January. It can still be found archived on The Daily Star (Kuwait edition) website.

Then the agency reported that "dusty villages far from China's capital are paying their own price for the government's plan to stage a postcardـperfect Olympic Games, enduring shrunken crops, drained wells and contention over lost land and homes." 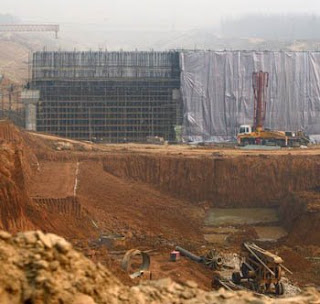 China, at that time, was rushing to finish canals to pump 300 million cubic metres of "emergency" water to Beijing for its "green" Games, ensuring a lush, sparkling host city would greet the world in August. Works included 300 miles of channels (pictured) and pipes cut into Hebei province, to take water from farming country already beset by drought and environmental strains.

Thus, as we noted earlier, Chinese provinces are not only going short of coal and electricity - to say nothing of food – to feed the Olympics (something picked up by American Thinker after Obama's facile comments) but water as well.

Therefore, for those who believe that China has put on such a wonderful display, there are probably at least 30,000 Chinese who think otherwise – not that they matter when it comes to the huge ambitions of the IOC and its fellow travellers.

But for those who also believe that China is a great and growing economic power, the fact that it decided to deprive its own hinterland of water in order to stage the Games says something about its fragility. A nation that cannot even keep both its farmers and its swimming pools supplied with water is not one in which there can be any great long-term confidence.