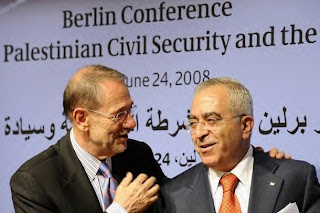 Russia is not the only country and the Caucasus is not the only region the EU finds hard to deal with and where, if truth be told, it makes a bad situation even worse. I think it is fair to say that everything the EU has done in the Middle East has helped to deepen the problems there.

Not least, we have the problem of aid to various Palestinian groups. The argument is always the same: we do not approve of terrorism or deliberate attacks on civilian population whether it is Israeli or Palestinian of the wrong kind and we would much rather Hamas, Fatah and whoever else acknowledged Israel's right to exist though if they don’t we understand; and, of course, we would much rather the Palestinians did not waste the money they get in aid on hate-filled school text books or on equipment for terrorists or simply on feathering the leaders' nests; but if we do not give them aid they will produce pictures of hungry children and empty shops and their friends in the NGOs will talk endlessly about humanitarian catastrophes. So, more lucre filched from the taxpayer is sent to completely corrupt and politically impossible Palestinian organizations.

It seems that the Palestinian Authority a.k.a. Al-Fatah is once again struggling to meet the government pay-roll's demands, which, given how many people are on that list, is a serious matter. If they don't get paid they will start using their ammunition and you don’t want that.

Added to which, it would appear, that Arab solidarity does not go very far and the EU had to step in (had to? Who says?) and add another €40 million over and above the €256 million already "disbursed" this year. Handed over to the Palestinian Authority is a better way of describing it than disbursed but let that pass.

The 40 million euro injection of funds comes on top of the 256 million euros in budget support disbursed so far this year by the European Union.

[Prime Minister Salam] Fayyad has struggled in recent months to pay government workers because many Arab donors have not met their financial commitments. "The situation is very, very tight, for sure," a top official from Fayyad's office said this week.

A Palestinian official said the EU money would help Fayyad meet the next government payroll, due in the first week of September. Fayyad has been waiting for months to receive $80 million pledged by Kuwait but it is unclear when the funds will arrive in the Palestinian Authority's coffers, officials say.

It has always been our contention on this blog that if we really do want to put pressure on the Palestinian Authority or the Hamas government in Gaza, we should stop all aid until all conditions, and that includes an open and transparent budget system, were met. Their Arab brethren would not step in. Of course, the Palestinians deprived of their subsidy might decide to put their economy in order instead of wasting money on rockets to fire into Israel and that would be all to the good.
Posted by Helen at 17:48