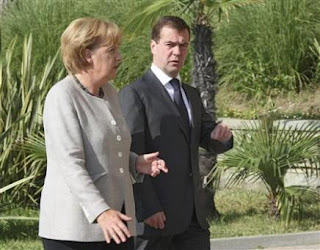 If we came away with nothing else out of the constitutional Lisbon treaty, it was an appreciation of how much the "colleagues" value their institutions, this being their preoccupation during this – and previous – treaty negotiations.

It is quite remarkable, therefore, that the rabidly Europhile Euractive can apparently view with equanimity what amounts to a complete breakdown of the established institutional order of the European Union, over relations with Russia.

In the natural order of things, EU external relations should be handled by the presidency, currently in the "safe" hands of M. Sarkozy, aided and abetted by the High Representative, Javier Solana, the baton handed on through successive presidencies until the matter is resolved (or not).

What Euractiv is embracing, however, is the growing view that German chancellor Angela Merkel should "step up and take the lead within the EU to resolve tensions over Georgia and reshape the West's relations with Moscow".

In one way, this is a completely logical view. By any account, Sarkozy has spectacularly failed to manage the Georgia crisis and, with clearly a better rapport existing between Merkel and president Medvedev (pictured) – to say nothing of shared geopolitical interests – it makes sense for the chancellor to front negotiations.

The point is, though, that Merkel is an interested party, with a very keen interest, not least, in maintaining the flow of gas, oil and coal from Russia. With Germany closing down its nuclear industry and its coal mines, without the active support of Russia, Germany no longer has an economy.

Yet, the whole ethos of the EU institutional system is that it should be "above politics", managed by disinterested "Platonic guardians" who are looking after the interests of the Union as a whole, without deference to the needs or ambitions of any one or group of member states. Whatever Merkel's merits, no one can accuse her of being disinterested.

On a more practical level, the very last person (or country) we want representing our interest is Germany. Having mismanaged our own energy policy, we too are reliant on Russian gas and are likely to become more so – and have also an unhealthy reliance on Russian coal. Merkel, therefore – in a very real sense – is hardly a "partner" but a serious competitor in the race to secure increasingly scarce and expensive energy resources.

Any idea that Merkel will, in representing the EU in its relations with Russia, will look after our interest lies strictly in the land of the fairies.

In this, history offers a very poor precedent when, in the post Yom Kippur oil crisis, individual member states broke away from the community interest and sought their own salvations. At the time, Jean Monnet and his integrationalist colleagues deplored this exhibition of national self-interest, calling for the rapid development of still more institutional structures to remove this undesirable trait.

Some 35 years later, the institutional structures are still not in place and, rather that pursue them with more vigour – not that they would be of any use – the "colleagues" seem quite content to abandon them altogether in their search for answers.

The significance of this cannot be overstated. Effectively, it represents a loss of faith in the drivers of European integration, with politics reverting to the classic model of Great Powers resolving issues between them, while the lesser powers pick the crumbs from the table after the pie has been shared out.

What is different now, though, is that the UK has absented itself from the game, yet we are still bound by the institutional ethos of the Union when it is clearly no longer functioning. This is the worst of all possible worlds.