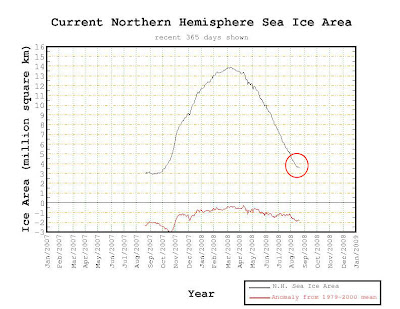 The summer meltback in the Arctic has ended and the ice is on the march, confounding the alarmists who were predicting in June that the Pole would be ice-free this year. Currently, the ice area is some 600,000 square kilometres greater than it was at its minimum extent last year.

According to Cryosphere Today, the median (1979-present) annual sea ice minimum occurs on September 8, but the dates have ranged by nearly a month from as early as August 26 to as late as September 24.

This current minimum seems to put the end of the meltback into the early end of the range, adding to the anecdotal evidence that we are in for an early (and hard) winter.

Meanwhile, the constant flow of "climate change" stories continue unabated in the media, demonstrating nothing more or less than the inescapable fact that the MSM on this issue – as well as many others – is way behind the curve.

And, of course, the tranzies are in full flow with their UN climate talks in Accra, Ghana aimed at "defining the building blocks of a new UN global warming pact" meant to be agreed in Copenhagen by the end of 2009. This Accra meeting is the third session this year, working towards a plan to agree a broad new climate treaty to succeed the Kyoto Protocol.

By the time they have finished, we should be in the throes of a recognisable cooling cycle, the leading edge of which is now becoming apparent. But, with the bulk of legislators looking the other way, aided and abetted by their tranzie fellow travellers, there is no sign at all that they will be prepared for what is about to hit the world.

Central to the problems that will arise is the myth that "global warming" is harmful. In fact, higher temperatures give us longer growing seasons, greater agricultural productivity and reduced energy consumption. We have, in effect, been enjoying for the last few decades a "global warming dividend", which is now going to evaporate as fast as did the "Cold War dividend" – and the politicos are going to be just as unprepared.

That, in fact, is the real nightmare. The human species has an infinite capacity to adapt to climatic changes but when global policies are directed – as they so often are – at addressing the wrong problem, the consequences are very difficult to deal with.

As always, therefore, Mother Nature is not the real problem. It is the more prosaic and infinitely more dangerous problem of bad governance which has its own infinite capacity – to make a bad situation worse.