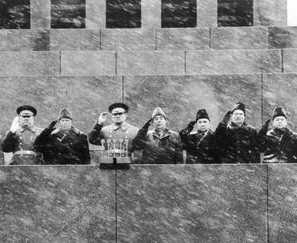 Courtesy of the Irish Times, we get some entertaining comments from businessman Ulick McEvaddy.

Chief executive of Omega Air, he is barely known outside his native Ireland but was a "big cheese" in the Irish "no" campaign. And yesterday he was holding forth at the Humbert summer school in Ballina, Co Mayo, where delegates were raking over the fate of the constitutional Lisbon treaty.

At this venue, we are told, he likened the EU commission to a Soviet-era politburo which attempted to enforce its rule over smaller states. "The orders come from Brussels rather than Moscow now. This is the kind of dictatorship we are talking about." He added: "The EU lacks the KGB, thankfully."

As to the treaty itself, McEvaddy called for it to be "slimmed down" to a mere 20 pages, unlike the current 500-page document. "The US constitution is a simple document, it covers 50 states, comes in a passport-size format and every US schoolchild is familiar with it," he said.

He then went on to say that the EU administration model was wrong from the start and successive treaties have tried unsuccessfully to correct it. "In Lisbon," he added, with a fine sense of style, "they were trying to correct it in an unintelligible drivel." Eurocrats, he opined, had "deliberately made the controversial charter unintelligible drivel so us peasants would not be able to understand it".

It was then left to former department of foreign affairs secretary general Noel Dorr, to put the case for the other side, his view being that the "no" result presented a problem for the EU as well as for Ireland. "The EU failed to communicate its message to the citizens in member states, especially in Ireland," Mr Dorr said.

Actually, Dorr is entirely wrong. The EU communicated its message perfectly to the "citizens" and, in Ireland at least, where they had an opportunity to cast a vote, they gave their verdict.

Entertaining though he is, McEvaddy is also wrong. Vile it is, but the EU commission cannot be compared with a Soviet-era politburo. The point about it attempting "to enforce its rule over smaller states" is entirely misplaced.

Time and time again, we have pointed out that the commission rules only through and with the permission of the parliaments of the member states, and with the connivance of their governments. It is not the brooding presence of a Soviet-style politburo but our own governments and MPs who conspire together to foist the rule of the EU upon us.

As for a politburo, the nearest thing is the much-misunderstood European Council, comprising the heads of states and governments of the member states. They are the people who hold this construct together and it is they who manipulate and exploit the system to circumvent our democratic structures and lines of accountability.

That is the message Mr McEvaddy should be broadcasting. Oppression, like charity, begins at home.