Something not right here? 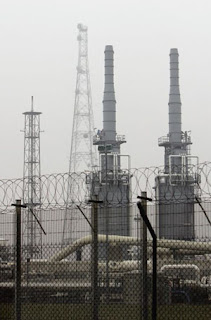 As we are assailed by news of rising gas prices in the UK, and nothing but gloom on the horizon, drifting in from local media in the United States is a consistent message: natural gas prices have "plunged", and with them electricity prices.

That is what the Baltimore Sun is proclaiming, remarking that is the "most under-covered story" of the last two weeks. It offers, says the paper, "a little hope for lower future heating bills than we once might have expected."

Prices for electricity and natural gas have fallen even more than those of crude, which has won all the headlines and gone from $145 to $125 a barrel. Mid-Atlantic electricity for January delivery has fallen by 24 percent since early July. Natural gas is down about 20 percent.

Maine customers are getting a similar break, with a report that a sudden drop in the gas market price means bills will rise just 3.36 percent rather than 17 percent over the summer.

Gas prices, we are told, fell more than 11 percent from 16 to 24 July and, during the same period, New York Mercantile Exchange futures contracts for August declined by 14 percent. The price drop is due to falling demand, triggered in part by cooler summer temperatures. Less energy was required from gas-fired power plants.

The Virginian Pilot gives even better news, with its local utility company announcing a rate decrease on Friday after a sharp drop in natural gas prices during July. "For customers, 100 cubic feet of gas, known as a therm, will now cost $1.40. That's down from $1.65 in July but still up from $1.01 in January," it reports.

A utility spokesman, however, does say that the market's volatility may make this rate decrease a temporary one. "I don't want to get too excited, because the market is still fluctuating," he says.

In a subject area that is notoriously complex, it is easy to draw the wrong conclusions from a quick "snapshop" and these reported rate cuts may indeed be temporary. But the US situation is now so very different from what we get from this side of the pond that it is germane to ask what on earth is going on.