And so it goes 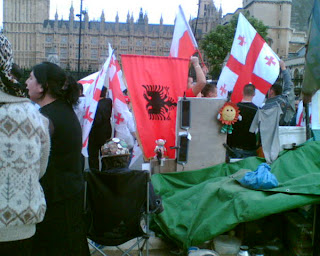 As we approach the fortieth anniversary of the Soviet invasion of Czechoslovakia it seems almost incredible that I should be attending another rally where the cry is "Russian troops out". But so it was today opposite Parliament.

A respectable number of Georgians (given the short notice of the demo) and representatives of a few other countries who are wondering who is next on the menu were there. Here are a couple of pictures, taken on my phone after the battery on the camera went. 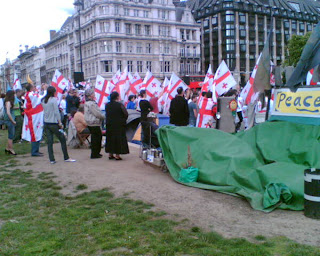 Sadly, these pictures show the rather ramshackle "peace camp" whose denizens did not join the demo as clearly they did not know where Georgia is and why anyone should care about it. The other photos, to be uploaded soon, avoid them.

The rather elegant St George's flag is, as most readers will know by now, that of Georgia. The other one is of Albania. There were also Ukrainian flags, Lithuanian and one or two others, including one I did not recognize that was carried by a clearly Muslin family. Some research will be needed.