The decay of a nation 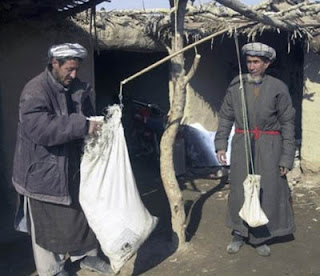 Having for the last week enjoyed the Wall Street Journal as breakfast reading, returning now to trivial venality of the British press, I am warming to my co-editor's view that the WSJ is definitely the paper to read.

Even without the print copy though, much of the content is still available in the online version and yesterday saw a superb article by Edward Gresser and Marc Dunkelman highlighting how "Free Trade Can Fight Terror".

What warms us to the thesis, of course, is that we made precisely that point in June, arguing that the best way forward to long-term peace in Afghanistan was by developing trade, and in particular the country's exports.

Gresser and Dunkelman, however, take this further, noting that there is a fierce competition among foreign countries to sell their products in the United States – "the largest commercial market in the world".

By opening up the US market to Muslim countries, they argue that this could not only help American consumers, "but also serve a larger strategic goal: that of boosting the economies which now produce large pools of unemployed, embittered youth." We can, they add, make trade an effective weapon against terrorism.

As always, at the heart of the problem is the tariff regime. This puts many nations in the Middle East, whose young people are susceptible to the sirens of Islamic fundamentalism, at an unintended disadvantage and works against our efforts to stamp out jihadism.

Fortunately, write Gresser and Dunkelman, the problem is easy to fix. The US buys about a fifth of all the goods and services traded world-wide - importing $2.63 trillion worth of the world's products last year alone. Socks come in from the Caribbean, towels from Pakistan, cheese from France, and oil from Saudi Arabia.

But apart from oil, the pair tell us, very little comes from the Muslim world. The 30 majority-Muslim states of the greater Middle East, from Morocco through Egypt to Pakistan and Central Asia, account for about 10 percent of the world's population. Yet they provide only about one percent of US manufactured imports, and an even smaller fraction of US farm imports.

These statistics, they say:

… hint at one of the least-studied but most ominous aspects of the modern global economy. Most of us frame the last quarter-century with narratives about globalisation, the rise of China and the spread of the Internet. But for the Muslim countries of the Middle East, and their neighbours in Pakistan and Central Asia, it was a period of economic disaster rivalling our Great Depression.

Between 1980 and 2000, their share of world trade fell by 75 percent, and their share of investment fell even faster. The region's unemployment rate became the world's highest, rising to an average of 25 percent for young people. With the region's population rising by nearly a quarter-billion, the high unemployment rates mean a pool of perhaps 25 million jobless and sometimes hopeless young people, often easy targets for fundamentalists.

The relationship between unemployment and insurgency recruitment has been well established. In Kabul, for instance – where displaced rural workers are flooding into the capital – it is well known that the Taleban hire young, unemployed men to engage in terrorist activities

At last, however, the problem is being recognised – in part. Democratic senator Maria Cantwell has introducing a bill called the Afghanistan and Pakistan Reconstruction Opportunity Zones Act of 2008. It aims to waive tariffs on many goods from Afghanistan and Pakistan's frontier provinces, so promoting trade from those regions.

But, with trade inevitably featuring large in the continuing presidential campaign, Gresser and Dunkelman argue that the next president should follow up with a broad, tariff-exemption initiative to help the Muslim world break its downwards spiral, revive trade and put its young people back to work.

They accept that a comprehensive solution to Middle East economic problems will require efforts to stamp out corruption, improve schooling and end political oppression. But few things, they declare, could do more to combat terrorist recruitment than draining the pools of angry and unemployed youth that are spread across this region. "Fixing American trade policy would be a good start."

Apart from agreeing completely, we would argue that that should include fixing the Bumpers amendment, the malign effect of which we noted in our piece. Support for rebuilding the Afghan cotton industry (cotton trading pictured above) could then be permitted.

That apart though, the key issue here is that the United States is capable of having a meaningful debate about trade policy during its presidential election campaign. Not so the UK where the Gresser/Dunkelman argument applies with equal force to our involvement in Muslim countries. In our benighted country, trade policy is a matter for the European Union.

So, while we still have the residual powers to send troops on combat operations, we do not have the wherewithal to fix the underlying conditions which give rise to – or perpetuate – terrorism. These could never become an issue in a general election. In this, therefore, we are no longer a complete nation, and thus become part of the problem which must be resolved by others.

Few people – and especially the British media – understand or accept how much thereby we have lost our independence but, at least, the WSJ in providing a contrast, gives those who wish to see it the opportunity to understand how deep-rooted has become the decay in our body politic and our nation.