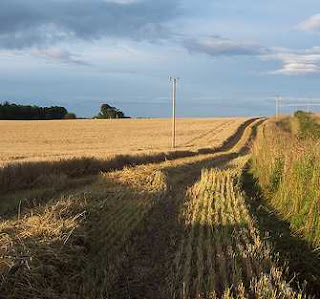 One of the (many) stories sitting on my files to do was an article picked up from the front page of The Yorkshire Post on Saturday, developing our own report last Thursday on the dire state of the UK wheat harvest.

Coincidentally, the story was picked up yesterday by the Mail on Sunday and thence by Watts up with that.

This invaluable blog, quite rightly, got excited by the headline to the Mail which proclaimed, "Awful August has delayed this year's harvest but global warming is not to blame" – a distinct contrast to The Daily Telegraph piece in early July which did indeed seek to pin the wet weather on global warming.

But, while we can rejoice in sense returning to at least one newspaper, behind both the stories of a bad harvest lies a disturbing picture that could have serious consequences for British arable farming – and thus the rest of us – amounting almost to a perfect storm.

The particular problem, as we pointed out in our last piece, is not so much quantity but quality, especially with the wheat crop which has deteriorated severely as a result of the bad weather.

As The Yorkshire Post reports, this means that much of the crop will be fit only for animal feed. Yorkshire farmers alone could take a "hit" of £10 million as their produce is downgraded.

If that gives temporary relief to hard-pressed livestock farmers, who have seen feed prices escalate to record levels, it is bad news for consumers as high protein wheat for bread-making will have to be imported in some quantity, at a premium of £20 per metric ton.

However, the problem for farmers may be even worse than the headlines suggest, as events elsewhere in the world take shape. Here, the situation in the Ukraine is of special interest. The region, on the one hand has enjoyed a record harvest, up to 43 million tons from 29.3 million last year, with expectations of exporting a surplus of 17.5 million tons during the coming year. On the other hand, the crop has suffered what is described as "insect-related" problems, which is forcing about 70 percent of it to be used for animal feed.

This surplus on the world market is expected to drive down prices of feed wheat, creating an abysmal situation for British farmers. At a time when input costs – from diesel and fertiliser to labour – are all rising, they are now reconciled to prices which are unlikely to cover the costs of producing the harvest.

Small wonder, the YP is retailing sentiment from farmers that many of them will drop out of wheat next season. Some experts are saying this could lead to a shortage next year.

It is here, of course, that an agricultural support system could make the difference. Where prices have been driven below the cost of production, there is a classic role for farming subsidies, if for no other reason than to ensure the availability of supplies in the following season and to take the edge of shortage-induced price increases.

However, now that the EU – which has sole competence over our agriculture policy – has opted out of production support and is looking to cut subsidies over the next budgetary period, farmers are on their own. They are looking at reduced prices, increased costs and less state support.

Perversely, the cut in support will not filter back into reduced EU contributions or lower taxes as the EU has siphoned off some of the subsidies to pay for its vanity project, the Galileo satellite navigation system, while it is also proposing to hand upwards of $1 billion to developing countries to promote farming there – reducing, incidentally, export opportunities for British farmers.

The net result of all this is that British consumers will still be paying huge sums for an agricultural support system, but one that no longer functions, while also paying inflated costs for their bread and other wheat-containing foods, costs which are set to go up even further next year.

Somehow, this is not quite what either farmers or consumers expected when we first joined the EEC but, as the implications of yet another failed policy sink in, one wonders whether the farmers will finally see the light and round against the EU, which is now doing nothing but add to their woes.