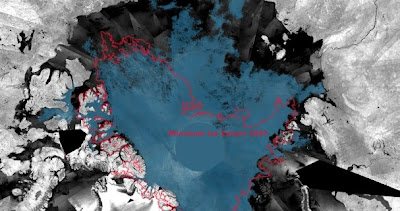 Looks like we (meaning I, of course) jumped the gun on the ice melt, picking up a flattening of the curve and extrapolating it into my own brand of wishful thinking. With a little more practice, I will make a fully-fledged warmist, ready and willing to attest that the world is about to come to an end – unless you pay me a zillion dollars for a bunch of carbon credits, that is.

Anyhow, the latest Cryosphere Today graph does not, on the face of it, support my earlier claim that the melt has stopped.

The difference between this year and last is helpfully shown by the Christian Science Monitor (see pic above - click to enlarge) and more can be got from NSIDC and, of course, Climate Audit.

The comments here are particularly interesting, especially the discussion about whether we are currently seeing melting or compaction. Then, there is always this, which seems to argue that ice changes cannot necessarily be attributed to global warming.

Needless to say, Richard Black of the BBC is positively drooling over the news that, "Arctic sea ice has shrunk to the second smallest extent since satellite records began," and he is by no means the only one, many being quick to claim that the Arctic is now at a climatic "tipping point".

One antidote is Andrew Bolt, who is always entertaining, and it is time, once again, to revisit this, courtesy of Watts up with that.

Has climate data ever been so exciting?