In a fantasy world of his own 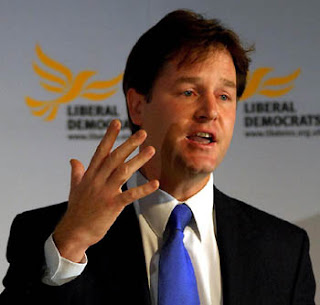 Two events yesterday, each in their own way, struck chill in the hearts of ordinary mortals – as opposed to the increasingly vapid chattering classes whose detachment from reality seems to grow with each passing day.

The first was more immediate and recognisable - if long expected – the price hike in gas and electricity from another two utilities, following up from British Gas and EDF. Most consumers are now resigned to increases in their energy costs of up to 35 percent, and not a few are seriously asking how they are going to afford to heat their homes.

It is perhaps small wonder that retail outlets are seeing soaring sales of thermal underwear, winter coats and warm knitwear, demonstrating that the public at least have a firmer grip of reality than the chatterati.

The second of the events was the offering by Mr Nick Clegg, leader of the well-named Lib Dims, of an "energy policy" of such fatuity that, had we been able to boast of a media where the combined headcount divided by the sum of their individual IQs gave a number less than one, they would have laughed it out of court.

According to this cretinously stupid man – who, against enormous competition, is obviously bidding for life-time tenure of the post of Westminster village idiot – there is "no evidence" of a "terrible energy gap" with the lights going to go out in the middle of the next decade.

Considering how, clearly, the lights went out in Mr Clegg's dim little brain some time ago, it is a moot point as to how or whether he would notice the difference but, that notwithstanding, his "analysis" of the problem is that our energy mix "is not green enough and we're over-dependent on oil and gas from parts of the world that aren't very reliable."

With thus less than half a watt of residual luminosity, the prescription a la Clegg is to increase greatly production of wave, wind and solar power, buoyed by a staggeringly banal expectation that, with this "magic mix", we could become net exporters of renewable energy by 2050. And how, precisely he plans to increase generating capacity to the 120 GW which we are expected to need by 2020, he does not even begin to say.

Back in the real world, however – the one currently uninhabited by any politician – the situation daily begins to look more and more bleak. This probably explains why so many politicians prefer the comfort zones of their own backsides (or each other's as the case may be).

From the other side of the world comes news via Bloomberg that in Asia liquefied natural gas prices may climb about 80 percent this year "as new projects get delayed and countries from Indonesia to Egypt curb exports."

Apparently, production at plants in Russia, Yemen and Indonesia, with a combined capacity of about 24 million metric tons, will be delayed until next year instead of starting in the second half. Supplies will be limited "just as South Korea increases imports 3.5 percent and Japan boosts purchases after an earthquake shut down its largest nuclear plant."

Thus, while the dismal Clegg is soaring into his fantasy of a bright new 2050 - by which time his nascent Alzheimer's will be fully established – Andy Flowers, a former executive at BP's LNG business is telling us that this winter "can be very tight," adding that, "There's not going to be much supply available."

This is borne out by other reports. For instance, the Indonesian LNG plant at Bontang is lagging behind its contracted volume, with the authorities deciding to divert some production to fertiliser manufacture. So tight is production here that Pertamina, Indonesia's state oil company, is planning to cut supplies to a group in Japan by 75 percent after its contract expires in 2010.

Yet Japan's imports rose 6.2 percent to 34.67 million tons in the first six months, according to data compiled by the Finance Ministry. The country, which imports almost all its gas, bought 66.8 million tons of LNG in 2007.

Furthermore, Japan, already the world's biggest LNG user, is taking an even bigger volume. It grew in July by 7.4 percent to 1.75 million tons from a year earlier. Now, in the shape of the Tokyo Electric Power Company, it wants still more, having increased its consumption by about 18 percent to 19.9 million tons in the year ended 31 March after an earthquake last July shut its Kashiwazaki Kariwa nuclear plant.

The Korea Gas Corp., which imports about 95 percent of South Korea's needs, is also on the look-out for more LNG and plans to increase its purchases to 26.4 million tons this year, leaving commentators to observe that Japan and South Korea "will pay whatever it takes to get the fuel." They do not have access to pipeline gas and the alternative is oil-based fuel.

This is just one tiny snapshot of a deteriorating global energy supply situation which comes to a head this winter just as the UK will be forced to acquire additional stocks on the spot market, at a price which is likely to make the current inflated prices look like a fond memory.

Yet, imbued with an ego that exceeds his intelligence quotient by many magnitudes, the sorry apology for a human being that is the leader of the Lib-Dims is so far from the land of the living that he has not the first idea of the nature of the crisis screaming down on us like a steam engine on fire. One can, therefore, only indulge in one's own fantasies, usually based on imaginative things to do with the wind farms that Clegg would wish to foist upon us all.

These fantasies may not keep us warm, or even make us feel better, but the prospect of causing that much pain at least affords us some small compensation, the only regret being that it will not be real.