A religion without borders 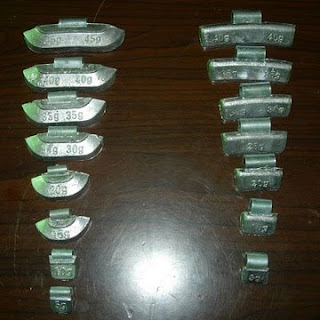 They were banned in the European Union in 2005 and now it is the turn of California to do the deadly deed.

We are referring to lead weights used for balancing car wheels and, according to the LA Times, they are to be phased out in California by end of 2009.

Such is the grip of the greenies that it is going further even than the arch-sponsor of scares, the EPA. Since it is not actually banning them - instead, the agency is sponsoring a "voluntary" initiative to reduce their use – the Oakland-based Center for Environmental Health took a law suit against Chrysler and the three largest makers of lead wheel weights for the US market.

In settlement, the makers agreed to a phase out, after the group had contended that discarded weights threatened drinking water. "Wheel weights have been identified as the largest new route of lead releases into the environment," says Michael Green, executive director of the Center for Environmental Health. "By moving the industry away from leaded wheel weights, we are helping to keep the lead out of our kids' drinking water."

To add to this legend, the paper helpfully tells us that, "lead is a highly toxic metal that can cause brain damage and other nervous-system disorders, especially in young children."

It has been used to make wheel weights for decades because it is cheap and heavy, allowing mechanics to use relatively small weights when balancing tyres – to say nothing of being malleable and soft, making it easy to trim and fit – but such is of no consequence to the greenies.

As in the EU, they will enforce weights made of steel or zinc alloy, which are larger and cost 20-30 percent more. But, since they are cheap enough, no-one is really that concerned and the greenies get their way yet again.

What is terrifying though is the way that what starts in the EU ends up in the USA – and vice versa - from whence the contagion spreads across the globe. It truly is a religion without borders.