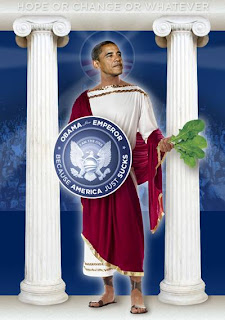 Democratic presidential candidate Barack Obama's big speech tonight will be delivered from an elaborate stage resembling a miniature Greek temple. The stage, similar to structures used for rock concerts, has been set up at the 50-yard-line, the midpoint of Invesco Field, the stadium where the Denver Broncos' National Football League team plays.

Some 80,000 supporters will see Obama rise up appear from between plywood columns painted off-white, reminiscent of a Holy Shrine Washington's Capitol building or even the White House, to accept the party's nomination for God president.

He will stride out to a raised platform to a podium that can be raised from beneath the floor to the singing of a heavenly choir. Courtesy of Cartago Delenda Est, we have a preview of his costume.