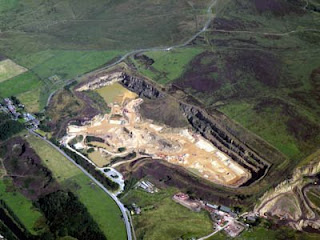 In The Times today is an interesting story – for those who are that way inclined – about a plan to install anaerobic digesters in every town.

These, according to Lewis Smith, the Environment Reporter for the paper, "could turn leftover food into electricity and fertiliser could be built around every town and city as part of a scheme being considered by ministers."

Tucked into the story though is that insidious, pernicious lie that pervades so much of modern journalism. "The new generation of anaerobic digesters," writes Smith, "has been developed in a government-sponsored trial designed to find ways of solving the shortage of landfill sites."

He goes on to write: "Pressure on space means that the country is running out of suitable sites for landfill and, with punitive landfill taxes introduced to encourage alternatives, digesters are increasingly being seen as an environmentally friendly solution."

We actually dealt with this issue in an earlier piece, where we relied on another blogger who had done the maths, demonstrating unequivocally that landfill sites are actually being generated faster than we could fill them.

As it happens, flying into Manchester last week, after our trip to America, I spotted (as one does) several open quarries, just a few miles from the city centre, which would – in the fullness of time – make ideal landfill, but for the dead hand of the EU. One is pictured, top left.

This is not so say, of course, that Smith personally is lying. Merely, in his ignorance and lack of focus, he perpetuates the lie that has crept into the body politic to explain and obscure the fact that we, as a nation, are no longer allowed to run our own waste policy.

That lack of knowledge also pervades the rest of his story. He writes uncritically of the government being "so confident that anaerobic digesters offer a realistic means of dealing with food waste that earlier this year it offered £10 million in grants to encourage the construction of further demonstrator plants. Plans for at least 60 are under way in Britain."

This we dealt with in a story last January when I set out a dire tale about how private enterprises had embraced anaerobic digesters as an admirable solution to organic waste disposal, only to have the economics of their systems wrecked by the dead hand of the Environment Agency.

The EA insisted on classifying these systems as "scheduled processes" – under an EU directive – and then charging exorbitant "authorisation" and "subsistence" fees which, with the stultifying and time-consuming bureaucracy involved, ensured that few digesters were installed. Those that were quickly became disused simply because, under the burden of regulation, they were too expensive to operate.

So, now that the government has effectively priced the system out of the market, it is offering public money – our money – to encourage the use of a well-tried and working technology that it, itself, has hamstrung.

Had Smith known anything of the subject – and the background to it – he could have written a really interesting and critical piece. As it is, we are condemned to the usual ration of extruded verbal material which has become the only fare available. Thus, as we keep saying, are we served by the fourth estate.