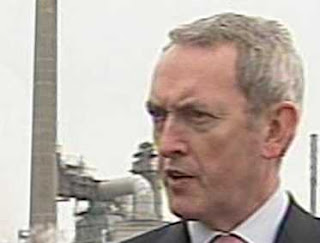 Readers may have noticed that we have been "banging on" a little about energy issues. The reasons, however, are obvious. Not only does the national interest in this area put us in direct conflict with the "colleagues" in Brussels, we could also say, "Energy security is fundamental to our existence as an independent, democratic, free state."

In fact, we do not need to say that. It has been said for us by none other than John Hutton, the Business Secretary – responsible for energy – in an interview in The Daily Telegraph this morning.

Needless to say, this paper picks the wrong point for its headline, majoring on Hutton's "admission" that the "era of cheap energy is over" – as if this was something we did not know.

Far, far more important is his recognition of the role of energy in our society. This we have actually said before. Basically, it is the foremost of all issues for, without a reliable energy supply – and in particular electricity – society as we know it simply ceases to be.

Just as profound – and something which should have been the headline - is Hutton's startling assertion that Britain's ability to generate its own energy needs to be above climate change in Government's priorities.

This is absolutely stunning. It is a complete reversal of current government policy and, if it holds, puts Britain at odds with the "colleagues" who hold climate change as the Holy Grail of all policies, to which energy is a very poor second.

This is the sort of thing that we would wish a Tory spokesman had said, recognising that, when the lights go out and we are chipping the ice off the windows – in September – the "saving the planet" message will not play too well with us ignorant peasants.

As it is, we wait to hear what the Tories actually think – if anything. But to have a Secretary of State finally articulate that which had to be said and to start the process of retreating from the greenie agenda – which indeed he appears to have done – can only be considered welcome.

It is, in a sense, a vindication of our stance on this blog. We hold no truck for the greenie agenda – as you might have noticed. And so important is it that its destructive creed is nailed into the ground that, until and unless the Tories follow suit, they are going to have difficulty convincing thinking people that they are fit to govern.

That is also a big story. Hutton has laid down a challenge to the Tories. Now, even if they are found wanting in the leadership stakes, simple followership would be enough. Silence is not an option.