The scourge of the greenies – US style 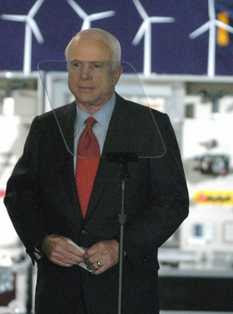 Confounding my earlier prediction that Booker would not be able to file his column this week – having been stuck in Newark for a day – The Sunday Telegraph gave him a time extension which enabled him to file late Saturday instead of the customary Friday.

So it is that Booker has been able to make as his theme our recent experiences from our journey into the land of the free where, like me, he was shocked by the extent to which the "greenies" have taken over the energy agenda.

What particularly struck Booker were a series of television commercials for the two presidential candidates, Senators McCain and Obama, each of whom were shown in front of film of the same giant wind farm, to lay claim to virtually identical "green" credentials.

Since, Booker writes, America has already built five times as many wind turbines as Britain, covering thousands of square miles, he checked out how much electricity all those 10,000 turbines actually produce. His answer came to around 4.5 gigawatts - not much more than a single large coal-fired power station.

Actually, these were "back of the envelope" calculations. The installed capacity for US wind farms is just over 18 GW, while the average output is a mere 16.8 percent, giving a system-wide output of around 3 GW. This is less than the coal-fired Robert W Scherer power plant at Juliette, Georgia, which produces 3.52 GW.

In fact, the situation is even worse than that. Because the output of the wind turbines can range from 0-49 percent of installed capacity, the average figure of 16.8 percent is considered too optimistic because it fails adequately to recognise the intermittency of wind generation. To meet peak system demand, a wind capacity value of a mere two percent of installed capacity is being considered, reducing the 18 GW to just over one third of one gigawatt.

That the two presidential candidates should, despite this, endorse wind power, comes as something of a shock. After years when America was vilified for not taking "global warming" seriously, the greenie agenda is now threatening to transform what is still the largest and richest economy in the world.

For instance, both candidates favour a version of the proposed "cap and trade" scheme, McCain coming out in support in May, following Obama into the pit after he released his energy plan last October.

Yet, conservative estimates of the cost of reducing US greenhouse gas emissions by 63 percent of 2005 levels run to more than $600 billion a year, at by 2030 of - representing a cumulative loss to the US economy, within 22 years, of $4.8 trillion - and Obama wants to go for 80 percent.

Although America is still dependent on coal for around half its electricity, with reserves estimated as likely to last 200 years, state after state is proposing to ban new coal-fired power stations. Environmental groups, with powerful political support, are now lobbying equally fiercely against natural gas or any new nuclear power plants.

Most dramatic of all are the implications of a Supreme Court judgement in the case of Massachusetts v EPA which ruled by a single vote that the EPA (effectively) must treat any greenhouse gases as "pollution", to be regulated under America's Clean Air Act.

The EPA is thus mandated to impose drastic new limits on emissions of carbon dioxide and other gases from pretty well any source, not just industry and transport but schools, hospitals, even lawn mowers.

The implications of this development – which have escaped the attention of the British media - are so immense for almost every sector of the US economy that government departments - commerce, agriculture, energy and others - have been queuing up to protest, arguing that the effects of such regulation would be so damaging that it should be regarded as unthinkable.

But politicians of both parties, led by the two men vying for the presidency, are so carried away in the rush to appear "green" that it seems there is no longer any national voice powerful enough to question the sanity of such measures.

All the fashionable talk is of how fossil-fuels must be replaced by massively subsidised sources of "renewable" energy, such as vast arrays of solar panels, even though a recent study (which we pointed out in an earlier piece) showed that a kilowatt hour of solar-generated electricity costs between 25 and 30 cents, compared with 6 cents for power generated from coal and 9 cents for that produced by natural gas.

What is terrifying, writes Booker, is the extent to which America's leading politicians seem oblivious to the economic realities of what they are proposing. The readiness of Messrs McCain and Obama to posture in front of pictures of virtually useless wind turbines symbolises that attitude perfectly.

Here, in the EU we are only too sadly familiar with politicians floating off into cloud cuckoo land over our future energy policy, with the virtual certainty that before many years this may leave us with a colossal shortfall in our electricity supplies.

But "the lights going out all over Europe" is one thing: if they go out in the richest economy in the world - while China cheerfully continues to build one new coal-fired power station a week - we may look back on the US presidential election of 2008 as a time when history really did reach a watershed; the moment when the nations of the West finally signed up to the most bizarre suicide note the world has ever seen.