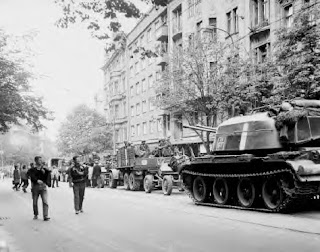 Last year I wrote about the anniversary of the Soviet invasion of Czechoslovakia under the title "Then again, some things have changed". The Russian military were blustering but it looked like they could do nothing about an actual invasion of any East European country and might, therefore, be too smart to try.

This year, the fortieth anniversary was marked early, thanks to our friends in the Russian military who have decided to take their August holiday in Georgia, an independent democracy on their border. Have things changed back to their normal Russian/Soviet state of affairs?

In some ways yes. Unable to control its neighbours, Russia like a schoolyard bully, prefers to hit out, particularly if that neighbour is smaller and weaker. But is it in a position to sustain a lengthy military occupation and extend it to the other recalcitrant neighbours? That I think is more questionable. Russia is relying on the supineness of the West that will simply acknowledge an updated version of the "Brezhnev doctrine," now called the Putin doctrine. But the underpinning of strength is not there. This is Russia's tragedy far more than anybody else's even if at the moment it is hard to feel sympathetic.
Posted by Helen at 10:48