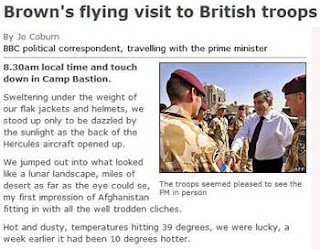 Readers might have noticed that we are not particularly impressed with the fourth estate – although there are a few journalists worthy of their hire.

However, the very worst of the breed is exemplified by the political correspondent, one such being Jo Coburn who works for the equally repulsive Beeb.

She recently accompanied the prime minister on his trip to Afghanistan and then filed a report on her experiences on the BBC website.

Despite having an opportunity that most of us would welcome – for the chance to get information directly from the "horses' mouths" on the Afghan campaign, which looks to be entering a worrying phase – no such trivial issues detained Mz Coburn or her colleagues for very long.

Having been driven to Kabul and the presidential palace under "incredibly tight" security, a press conference was then arranged for these loathsome creatures.

But, writes la Coburn, "if Gordon Brown had thought he would be asked about the future cooperation between the two countries then he was sorely disappointed." She drools on:

All of us wanted to press him on the future of his leadership. Did he accept his strategy up until now had been wrong? What were his relations like with his foreign secretary, David Miliband, amid tales of political plotting?

There is something particularly despicable about these shrivelled, etiolated creatures that render them beyond contempt. That the likes of Coburn cannot even see that she is wrong to the extent that she quite happily parades her foul trade on the net really says all you need to know about her and her ilk.