A journey from hell 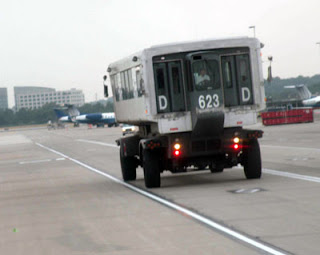 Well, we left central Washington yesterday at about 2 pm local time, in order to catch the 4.59 pm shuttle to Newark and thence back to the UK - me to Manchester and Booker to Bristol.

On arrival, we were told the shuttle had been delayed - half an hour initially, and then an hour, and then two, and then three ... Booker was alright but my connection was lost and I had to rebook for a 10 pm flight. Frustration mounting, we were finally let on board, only to be stuck in the "penalty box" off the runway for another two hours.

By the time we got to Newark, we seemed doomed. More in hope than expectation, we split up and dashed to our separate gates. My gate area was empty, so I went up to the booking desk to ask what to do next... Miracle - your flight is boarding, I was told. It had been delayed and then re-allocated to a different gate. By the skin of my teeth, I caught the flight and got back to Manchester shortly before 11 am UK time - some 17 hours after leaving downtown Washington.

However, my luggage is still in Newark and so, as I have now discovered, is the unfortunate Booker. He missed his connection and is waiting there for a flight out tonight. And like me, he is also separated from his luggage. Worse still, without his computer and suitable facilities, writing is impossible. For the first time in many a moon, there will be no Booker column in The Sunday Telegraph this weekend.

Happy bunnies we are not. But, even if Booker is the wrong side of the pond, normal blogging will resume here shortly.