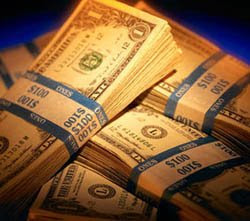 The most important economic news of recent weeks, Irwin Stelzer tells us in today's edition of The Sunday Times is the recovery of the long-comatose dollar.

But what is good news for the US economy seems to be bad news for the eurozone. Ambrose Evans-Pritchard reported earlier this week that the ECB was taking a hammering for making a serious error by raising interest rates a quarter point to 4.25pc last month.

It seems that it has misjudged the seriousness of the downturn in the eurozone economy, which has seen a contraction of 0.2 percent in the second quarter, compared with the first three months of this year, with the economies of Germany, France and Italy probably now in full recession.

In Spain, the picture is darkening so fast in Spain that Prime Minister Jose Luis Zapatero cancelled holidays and called his cabinet back to Madrid mid-week for the first emergency session of its kind since the Franco dictatorship. The crisis meeting agreed to a €20bn (£16bn) blitz on public works, tax cuts, and a mortgage rescue to halt the downward spiral.

Growth has also turned negative in Ireland, Denmark, Latvia, and Estonia, while grinding to a halt in Sweden and The Netherlands. Iceland contracted by a staggering 3.7 percent.

However, if Ambrose always has a "down" on the eurozone, and is thus considered by some a little biased on the pessimistic side, not so the Wall Street Journal which yesterday took a swipe at the "colleagues".

Throughout the depth of the financial crisis in the US, the Euros have been warbling consistently about "decoupling" – arguing that the mighty European economy is no longer a slave to the American economy, and obeys its own rule. Europe would remain sound while the US would sink into a bottomless pit.

And, says the WSJ, Euro-zone hopes about decoupling from the US economy seem to have come true. But, in tune with the immutable law that dictates that nemesis always follows hubris, this decoupling is not quite as planned. While the eurozone contracted by 0.2, the US posted second-quarter growth of 0.5 percent

Like US fears of a recession, says the paper, the eurozone's economic resilience appears to be, if not mostly "mental," at least somewhat exaggerated. Despite all the talk about a US recession, it concludes, the economy may actually unravel faster across in Europe.

This is certainly what the markets think, for the moment, even the Financial Times reporting that they are becoming increasingly convinced that the US is best-placed to weather the global downturn. But then, if you think about it, for an organisation that gave us the Common Fisheries Policy, it never was a safe bet that the EU would be any better at managing the eurozone economy.