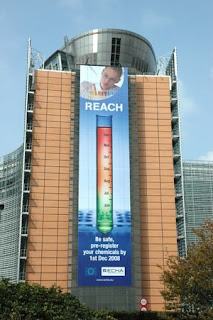 From the la la land of "they would say that, wouldn't they", we actually had a headline in The Guardian yesterday (online edition) declaring, "EU metals and chemical law not huge burden – official".

This is about the EU's REACH directive, supposedly on chemical safety – one on which we have written, several times - the story being a copy-out from a Reuters report.

What we are treated to is an uncritical interview of Geert Dancet, executive director for the EU's Chemicals Agency (ECHA), the man who is being paid by the EU to implement its Directive. And, to the surprise of no-one, he actually says it "will be of huge benefit overall" – not least to the 250 eurocrats employed to process the paperwork.

"The cost of registration is not prohibitive," the man says, "and is affordable for the industry in general". The direct cost to European industry, alone, by the way, is estimated to be as much as €2.3 billion over 11 years.

But tucked into all this is the bland assertion that the regime "may lead to some consolidation" but nothing is made of this. Deconstructed, this actually means that some firms – mostly the smaller, specialist enterprises, will be driven out of business by the costs and the red tape, concentrating the industry into fewer, larger firms, who will then pass on their costs to their consumers.

Dancet happily chirps that, "the cost is around €40,000 ($61,980) for a metal above 1,000 tonnes," referring to the cost of registration for each company, noting also that firms "would also have to pay to collect additional data, describing the metal's environmental impact". But he neglects to say that this is ten times or more than the cost of registration.

He does say though that the kindly EU commission has "set aside enormous discounts ... if a company is extremely small it can get a 90 percent discount on its registration fee," as if that made a blind bit of difference.

However, with an international press agency acting as his conduit for propaganda, Dancet has nothing to worry about … for Reuters read, "propaganda Я us".