The loneliness of the long-distance eurosceptics 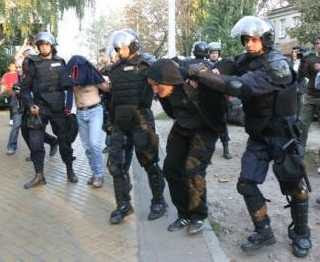 The march of European political integration never slackens, and neither does the method vary.

That much was evident from yesterday morning's (very limited) crop of stories, dealing with varying degrees of emphasis with an EU plan for "a European CIA" and a proposal that the European Gendarmerie Force (EGF) - which currently only involves France, Italy, Spain, Portugal and the Netherlands - should become an EU body.

Such was the broader lack of interest that it found its way only into a few newspapers, including The Guardian, the Daily Mail and The Daily Telegraph, with Bruno Waterfield also commenting (in some detail) on his blog.

The media refer to a 53-page report drafted by the "Future Group" of interior and justice ministers from six EU member states - Germany, France, Sweden, Portugal, Slovenia, and the Czech Republic, which is variously described as "confidential" and, in one case has the label "seen by …", all indicating a degree of back-door dealing and secrecy.

Whether that was the case, the report is now up on the internet, published by the German federal interior ministry, with the executive summary here and the full text here.

It is, as is usual in these cases, a model of restrained language, studied reasonableness and masterful ambiguity. Thus, on the vexed question of a Euro-gendarmerie, it tells us that, "Civil protection is a genuine responsibility of Member States," with the Group merely offering its "support" for the development of a European policy in this area, "in order to improve overall consistency, better efficiency and even greater solidarity between Member States."

Who could possibly object to that?

Couched in terms of offering "assistance", the key passage states that, "Solidarity is a key principle within the European Union," then noting: "Member States confronted with major emergencies can expect to receive support by Member States and the Community." And, just by way of reassurance, we are informed:

Supporting and additional civil protection measures by the European Union should complement the responsibility of Member States to ensure their own national and local capability. At EU level it is necessary to develop this solidarity principle, which will enable a country at risk to obtain appropriate help from other Member States.

Only the fevered brains of rabid eurosceptics could read into that any idea of foreign storm-troopers landing on these shores to suppress civil disorder and to lock up dissidents who had finally taken direct action against the growing totalitarianism of our government in Brussels.

Any such preposterous outcome can thus be safely denied – ridiculed even – as the "colleagues" purr reassuringly – as has the Home Office – that, "Under European law there is no question of the UK being forced to participate in measures it opposed."

Within the framework of the report, it is indeed up to member states when "confronted with major emergencies" to call in assistance as needed. But, what constitutes a "major emergency" is not specified and nor are the circumstances under which "supporting and additional civil protection measures" might be provided.

Thus, the prospect of armed gendarmes being deployed in support of a British government to suppress civil disorder is not ruled out. No amount of textual analysis would suggest that this could ever be excluded as a possibility.

That, of course, is the way the system works. It relies on ambiguities and deniability, working up structures and systems which can be presented as harmless and innocent, but with a dual-purpose agenda that is never declared until it is too late to oppose it.

Funnily enough, we wrote about the Euro-gendarmerie in June 2007, England Expects wrote about it last October and I linked to his post.

Furthermore, my co-editor and I have written endlessly about the Hague Programme, on which this "Future Group" report is based, more recently in February of this year but with posts going back to 2004.

Our February piece was based on an article written by Philip Johnston who then rehearsed the issue of an EU gendarmerie – and much more - asking despairingly, "does nobody care any more?"

We answered him with the words, "nobody does care or, at least, not enough people care." That was the truth now, and it remains true today.

Taking my customary side-swipe at Iain Dale (But hey! He's a big boy and he can take it), I observe on the forum that our government will need the Euro-gendarmerie for when our Police finally do go on strike, when the lights go out and when there are riots in the streets.

But then, even if they wore jackboots and red armbands, I observe, our chatterati would still be writing blogs about the soap opera. Meanwhile, the "colleagues" can happily make their plans and publish their reports. A few journalists will report it and our provincial government will say, in effect, "Move along … nothing to see here", and everyone goes back to sleep… 'cept us and a few others.

What was that about the loneliness of the long-distance eurosceptics?