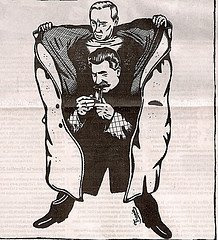 In Wednesday's Wall Street Journal Bret Stephens's column argued something we have been saying on this blog for a long time: Russia’s flaying about and bullying neighbouring smaller and weaker countries are not a sign of strength, no matter what most of the media repeats ad nauseam; it is a sign of weakness.

Putin, supposedly the strong man of Russia and of the whole Eurasian sphere, has demonstrated his and his government's weakness on a number of occasions, in the international and, more importantly, the domestic arena.

Continued on EU Referendum 2.
Posted by Helen at 01:14