Things must be bad 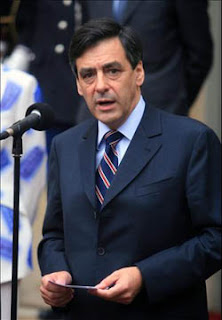 There is nothing so sacred as the holiday period in France, when only a major catastrophe would cause ministers to return to the heat of Paris. And yet … that is precisely what is happening

While Nicolas Sarkozy gads around on the world stage, giving into the Russians, his ministers have been summoned back from their holidays by prime minister Francois Fillon (pictured). They are to attend, according to The Times, an emergency meeting, "in a bid to head off recession after the economy shrunk for the first time in six years."

However, it seems that Fillon has nothing concrete to offer, other than an acknowledgement that his government has abandoned hopes of escaping the global economic crisis. Instead, he is pledging to push ahead with Sarkozy's programme, which includes modernising the economy, reducing state spending and introducing flexibility into a rigid labour market.

Quite why that should warrant an emergency meeting is not quite clear, so there may be another agenda at play. And there is also an EU dimension as Fillon is threatening to call European Union finance ministers together in the search for a "common response" to the slowdown. EU countries should "commence this attempt at coordination," he declares, "which ... hasn't happened yet."

Yet, if Fillon is not quite sure what to do, the depth of the crisis is clear. The French economy shrunk by 0.3 percent in the second quarter and the Bank of France is predicting growth of just 0.1 percent in this quarter. The country is teetering on the edge of recession.

That compares with Fillon's prediction that France would enjoy growth of about two percent this year, although he has not openly admitted that he was wrong, simply that his figures will have to be "adjusted".

Needless to say, the left wing daily Liberation is not being so generous. Mr Sarkozy's dream of kickstarting France, it says, is "turning into a nightmare". That is something, undoubtedly, M. Fillon will be keen to share with the "colleagues".