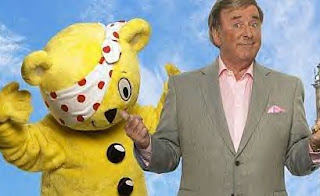 Let us face it the EU is not the only organization that plays silly-bugger games with other people’s money, channelling it, wittingly or otherwise, to terrorist organizations. I rarely read the Daily Mail (make that almost never) and have to find out about stories in that rag newspaper from various blogs, British or American.

So this story comes with gratitude to the indefatigable Michelle Malkin (how does she do it?). The Daily Mail reports that £20,000 of the money raised by the BBC through its Children in Need appeal went to Leeds Community School in Beeston.

Along with £230,000 from Leeds city council, it was spent on the school and the adjoining Iqra bookshop, which was run by the bombers and became the place they hatched their plans.

Both Children in Need and the council were led to believe they were funding educational work for children.

But, according to Martin Gilbertson, who worked at the bookshop and the community centre, the funds went on propaganda.

"They blamed everything on the Jewish conspiracy, they hated Western culture it was like living with jihad on a daily basis" he said.

The bookshop was run by Mohammed Siddique Khan and Shehzad Hanweer of 7/7 bombing fame. They and Khalid Khaliq, jailed this year for terrorism offences, were trustees of the Beeston Iqra charity.

This raises various questions, not least that of why people give money to charities through the BBC or any other media outlet. How can you possibly tell what the money goes on?

Going on from there we have the problem of the Children in Need and Leeds City Council repeating like blessed baa-lambs the mantra of ignorance. They just didn’t know. They gave the money to a registered children’s charity who, they assumed on some basis unknown to the rest of mankind, would spend it wisely. Would it not be a good idea if you are disbursing large amounts of other people’s money to check out what that dosh is being spent on?

Come to think of it, would it not be a good idea to define what is a sensible way for a children’s charity to spend money? After all, why exactly did that school, presumably in receipt of large amounts of taxpayers' money anyway, need extra help from a charity? Why was money given to the bookshop in any event but, especially, why was it given without anybody checking out its stock?

And so on, and so on. One could list questions indefinitely. But the top question will be: what exactly is the purpose of that egregious quango, the Charity Commission?

[Michelle Malkin says that the Children in Need teddy bear is crying out for a clever bit of photoshopping. If anybody is prepared to work on it, I shall post it .]
Posted by Helen at 17:59