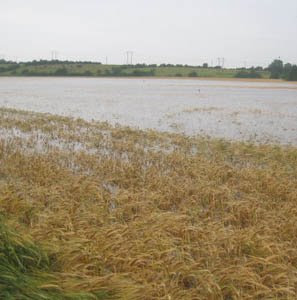 After the wash-out summer – where hardly a day seems to have passed without rain – harvest-watchers will be unsurprised to learn that wheat futures for December delivery on the Chicago exchange are up to $8.99 a bushel (although still down from the February peak of $13.50).

However, the issue is not quantity, per se, after record global plantings, but quality, the late harvests – delayed by the weather – reducing the amount of milling quality wheat. This is affecting some producers in the United States, but is also getting to be a major problem in the UK and affects even Black Sea producers.

More recently in the UK, Northern Irish farmers have suffered extensive flooding (pictured) in what is slated as the wettest August for a hundred years, although even Devon farmers are complaining as their wheat starts to sprout in the fields. One farmer even lamented that he was depressed than he was during foot-and-mouth.

Throughout the country, farmers are facing a race against time as waterlogged fields prevent them getting the combine harvesters into action and, although the situation is not irretrievable, some are warning that it is getting that way.

Unless we have some prolonged dry spells in the next two weeks, many farmers are in trouble – and so are we, with the price of bread reckoned to soar as much as 30 percent as shortages bite.

But just to show that, sometimes, Mother Nature is the least of our problems, a Bloomberg report tells us that Russia is enjoying its best wheat and barley harvest for 15 years – and is rapidly running out of storage, putting much of the crop at risk and limiting exports.

Apparently, Russia has about 95 million metric tons silo capacity, against a forecast grain harvest of at least 85 million tons – although some estimates put it at 97 million tons.

Of course, that is only part of the picture. By no means all the silos are in the right place. More are needed in the southern and central parts of the country, where most grain is produced and exported.

Building 100,000 tons of silo capacity in Russia costs about $50 million, including costs for rail, road and power connections and, while Russia seems to be able to find the money to finance its mad adventures in Georgia, it has been reluctant to invest in infrastructure.

This does not only extend to bulk storage. The country has only 12,500 specialist rail trucks needed to transport grain, more than a third fewer than are needed. For exports, Russia's total port capacity for exports stands at about 15 million to 18 million tons a year, only just enough to meet demand if there are no problems. The government is forecasting grain exports of about 15 million tons this season.

Russia, therefore, is in a position not so very different from less developed economies like Egypt and Afghanistan, where it needs to develop infrastructure in order to exploit its production potential.

By contrast, the US has about three times more silo capacity than it can produce in a single harvest, and can easily cope with fluctuations in supply and demand. But then, this is a free-enterprise system, whereas, even now, much of the Russian trading system is in State hands.

If we are going to suffer food shortages, therefore, this is going to be as much due to inadequate governance as it will be Mother Nature, although bad weather and bad government is a formidable combination.