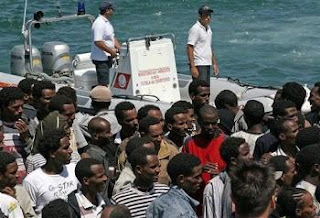 Although – or so we are told – the wave of immigrants from the EU's central and eastern European members to the UK has slowed, there has been no slackening off in the rate of migrants from third world countries into other EU member states.

Reported by AFP, nearly 900 such immigrants have arrived on Italian shores in the last two days. The coastguard rescued some 480 people on Friday after they were spotted near the island of Lampedusa, a speck of land 100 nautical miles from Tunisia and 200 miles from Libya, the embarkation point for most of the boat people.

Another 42 arrived on their own, the day after 355 Eritreans disembarked on the Mediterranean island, the southernmost piece of Italian territory. Nearly 1,600 people are now crowded into Lampedusa's processing centre, built to accommodate 850 people.

Arrivals have topped 15,000 in the first seven months of the year, nearly double the figure for the same period in 2007. Most risk their lives in rickety, overcrowded boats in the hope of finding a better life in Europe.

Unsurprisingly, the Italians have had enough. Berlusconi's government is planning to double the number of reception centres for immigrants across Italy from ten to twenty. But it is also renaming them, calling them "centres for identification and expulsion." The big question though, is to where will they be expelled?

Does our welfare system beckon once more?