War in the Caucasus 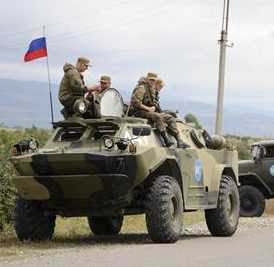 This is definitely a specialist area for my co-editor, and she will be writing on this issue as soon as it is possible to get some degree of clarity as to what is going on.

The MSM, of course, must rush into to the breach, and as you would expect, is offering various degrees of analysis, of which The Times is an example.

It tells us that it would be a serious mistake for the international community to regard the dramatic escalation of violence in Georgia as just another flare-up in the Caucasus. No doubt, my co-editor will agree with that sentiment, although she will undoubtedly be offering serious health warnings about any other views. Western journalists rarely have the depth of knowledge of these areas to be able to offer much beyond received wisdom and acres of extruded verbal material.

I will confine myself to just a short comment, therefore – posted early for reasons which will become apparent later today. That is simply to observe, as always, that the EU is left floundering, evidence the report in Deutsche Welle.

To be fair, so is Nato and so is little Angela Merkel, who is reduced to squawking from the sidelines, calling for an "immediate stop" to all violence in South Ossetia.

However, we will all rest easier in our beds knowing that the EU commission's spokesman, John Clancy has said that EU officials are "extremely concerned" at the reports of heavy fighting in the South Ossetian conflict zone. The EU "deplores the loss of life," Clancy says, adding that, "The European Commission calls for an immediate end to hostilities and for a swift resumption to negotiations in the framework of existing formats."

He then tells us that the EU "stands ready to increase its contribution to conflict resolution in Georgia with confidence-building measures."

Mr Putin, no doubt, will be studying this statement with very great care, ready to abandon his venture in his rush to appease the mighty ones in Brussels.