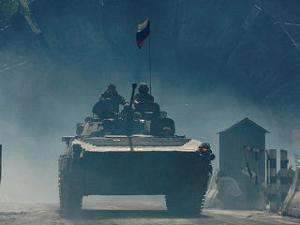 Deutsche Welle is telling us that an emergency EU meeting Monday in Brussels on how to respond to Russia's recognition of the Georgian breakaway provinces of Abkhazia and South Ossetia "could be instrumental in confirming the EU as a force for peace."

If this is supposed to be an example of serious journalism, one can only stand back and wonder. On the one hand, the EU has no military forces at its disposal and cannot intervene physically in the region. It is thus totally reliant on its "soft power".

On the other hand, though the good offices of France's foreign minister, Bernard Kouchner, we learn that the EU has ruled out sanctions against Russia.

We also know why the EU will not take any firm action in this respect. Whether an inspired leak or not, the threat of Russia withholding gas or oil supplies to Europe (or even both) has the euros paralysed. They cannot risk even the briefest of interruptions.

Thus, one has to ask, what is the purpose of this fabulous "emergency summit"? Well, the clue also comes from Angela Merkel who is saying that she believes it is important for Monday's summit to send "a clear political signal of the European Union's unity" on the crisis.

If that then is the game, Deutsche Welle notes that the "opportunity" is mined with potential pitfalls and risks. The potential for disagreement, it says, is enormous. In one corner are Poland, Estonia, Latvia and Lithuania, the countries most dependent on Russian gas supplies – who will, we are told, be demanding "radical" action.

In the checkerboard of influence and interests, Polish prime minister Donald Tusk can be relied on to toe the EU line, but president Lech Kaczynski has said that the Polish and Baltic stance at the summit "won't be completely radical, but radical enough."

Then there is Czech president Vaclav Klaus will be accompanying Prime Minister Mirek Topolanek to Brussels. Both men have widely diverging opinions on the issue and it is not clear which of these leaders will speak for his country.

Thus, with no real unity on offer, according to Voice of America, analysts expect that, "for the sake of [a show of] EU unity, summit members will use strong language, but will forego tough measures."

One thing they might do is appoint a special envoy to Georgia to ensure that a cease-fire is observed and, if Moscow does not fully implement the six-point agreement brokered by Sarkozy, a French official has said that European relations with Russia will be "under observation."

If it is action you want, then look to Turkey. Without much fanfare, it is preparing to host the foreign ministers of Russia, Georgia and Azerbaijan for separate talks on the ongoing crisis in the Caucasus, all with a view to setting up what it describes as "Caucasus Cooperation and Stability Platform".

By contrast, what we are seeing from the EU is the usual display of institutional impotence, dressed up in fine language but devoid of action. Very soon we will have seriously to consider revising the EU's motto. From "united in diversity", it should become "united in inaction" – the only thing the "colleagues" can agree on.