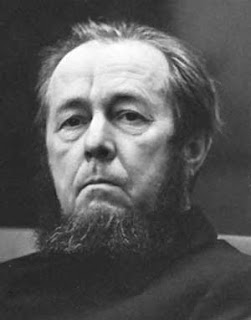 The death of Alexander Solzhenitsyn at the age of 89 has been announced this morning. I was woken up by a phone call from a friend who wanted to know if I had seen the news. He also asked me whether the great man's writings were different in Russian from that in English.

My response was slightly bleary but very firm: his writings became worse and worse as he managed to avoid any editorial work on it. He was not a good writer and had no sense of style or discipline. However, Solzhenitsyn's achievements in helping to bring down the Communist system were undoubtedly great. On the other hand, the Russian nationalism in its autocratic form that he supported, though undoubtedly an improvement, was not and is not such a wonderful system.

With the boss's permission I shall write a longer obituary on the man later in the day.
Posted by Helen at 10:28