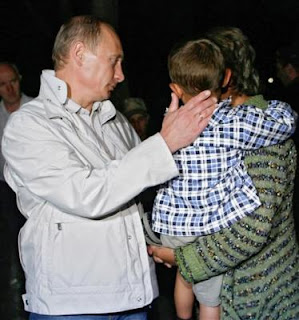 On this blog we have always maintained that former President, now Prime Minister, Putin and his teddy bear (mishka), President Medvedev tend to be less than adroit when it comes to foreign adventures, whether attempts to bully and blackmail or, as has now happened, actual military invasion (and no, I do not mean South Ossetia, which has been under Russian occupation for something like ten years).

Chancellor Merkel, who led the nay-sayers during the last NATO Summit in Sofia, and thus may be said to have helped to precipitate the crisis in the Caucasus, has now changed her mind. She is reported by AP as saying that Georgia is strongly on track to becoming a member of NATO, which is not entirely logical but there you are.

Her comments, as reported by AP are not precisely accurate. It is not an EU ceasefire we are talking about but a Russian one that they keep offering but never quite keeping to. The EU has not precisely covered itself with glory. Also, the state of the Georgian military is not entirely clear. There are several opinions, some maintaining that the Russians did not have a totally easy ride.

Meanwhile, thanks to Glenn Reynolds on Instapundit, we learn that

Ukraine has agreed to take part in a missile defence system designed by the United States to protect Western countries. The government in Kiev defended its decision for military co-operation with the West, saying Russia cancelled a bilateral treaty with Ukraine earlier this year.

No doubt, this will be interpreted by all the Kremlin-lovers, since they cannot be described as Russia-lovers, as a "humilation" for Russia.

Whatever one calls it, this is not precisely what Mr Putin had intended, one assumes. Some things have changed in the last forty years. Time for Russia's rulers to understand that.