It's the same old story 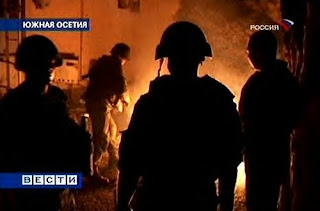 If anyone out there really believed that Russia's attack was about South Ossetia or Kosovo, do get in touch with me. I have a bridge I'd like to sell you. Russia is sweeping into Georgia proper, despite pleas for a cease-fire, and we hear the same question as many heard before: where are our friends?

Get used to it - if Russia bullies anyone, the West keeps schtumm. Georgia will get no help any more than the Balts did, or Poland, or Hungary or Czechoslovakia. We shall see no large demonstrations against blood for oil (and believe me, oil comes into it). The UN will not condemn or do anything. How can it, with Russia on the Security Council?

Something may come out of the US's unreserved condemnation of the aggression (oh, by the way, did the UN approve this and where does international law stand on the Russian attack on Georgia?), which was supported by Senator McCain. Senator Obama waffled about the UN and the international community. This is just to warn everyone.

Can we, at least, offer real help to those who are the next on that list, Ukraine and the Baltic states?

As I look through my various postings and articles about Russia I feel that, once again, I have played the part of Cassandra. Appeasement is never a good idea, particularly if the one you are appeasing is strong only through the folly of its opponents. Yes, Russia looks to her interests and makes no secret of it, though nothing good for the country or its people will come from it getting bogged down in another war in the Caucasus. Nothing good came from the Soviet empire and this will be no different. But the Kremlin cares little as we can see from the little trolls that have cropped up on all the sites and forums (even Facebook, I am told).

The question is, however, is it not time we all looked to our interests. Do we even know what they are?