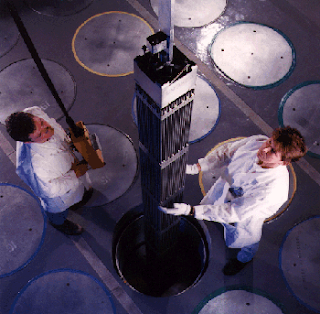 One of the "killer points" against reliance on nuclear energy is the enormous cost of decommissioning power the power stations at the end of their working life. Currently, to deal with first generation of power plants, the cost is estimated at £73 billion.

However, out of the blue, we learn that the nuclear industry has produced a "hidden" resource in the form of a stockpile of plutonium and uranium equivalent to 2.6 billion barrels of oil. If converted to fuel, it could be worth nearly £160 billion and power three nuclear reactors for 60 years.

Furthermore, this stockpile is to become the responsibility of the Nuclear Decommissioning Authority (NDA), which acts on behalf of the State. At the moment it is classified as neither a liability nor an asset but, if it is now classified as an asset, this would make a nice little nest egg for Gordon Brown.

More to the point, by recycling plutonium and uranium into so-called mixed oxide fuel (MOX), these materials can be used in advanced nuclear reactors, of the types currently operated in France, Germany, Japan and Belgium.

Although we have no commercial capacity for using MOX, all three reactor designs being considered for Britain by the Nuclear Installations Inspectorate could burn this fuel. MOX is already made at Sellafield for use overseas, but a £1-2 billion investment in a new fabrication plant would be required to produce commercial quantities for UK use. That cost, however, could be offset against the £2 billion disposal costs that would be incurred if the stockpile was not used.

Happily, the fuel is hated by the greenies - alone a good reason for using it - but, even better, its use as nuclear fuel would further discomfort them by saving 0.5 billion tons of carbon dioxide emissions.

All of a sudden, therefore, the nuclear power equation has tilted decisively in favour of building new nuclear plants. Far from being a liability, it looks as if the industry has been paying its way and the cost-hurdle of decommissioning should no longer be an issue.