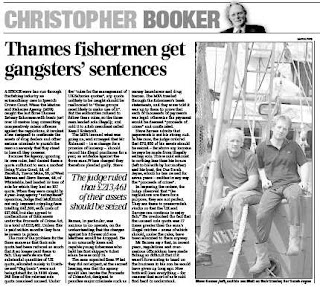 The lead story in the Booker column yesterday is so unpleasant that it makes you wonder whether it could really have happened in Britain.

The story speaks for itself but, in brief, three Thames Estuary fishermen - forced to land over-quota fish in order to make a living, through arbitrary refusal of the officials to release unused quota - have been prosecuted for their "crimes".

But, not content with swingeing fines and costs, the officials had sought – and obtained from a compliant judge - confiscation of their assets under the Proceeds of Crime Act, to a total of £213,461. Unless this sum is paid within months the fishermen face two years in prison.

That summary though does not begin to do justice to the true horror of what has happened but, speaking personally, I so hate this type of story that I find difficulty writing about it – hence my leaving it so late.

This is not from any squeamishness. The reluctance stems from the feeling of impotent rage it invokes in me, a sense of frustration combined with a black hatred that comes from the very depths of my soul, for the malign injustice of a policy – and its execution – that deprives good men of a living and treats them so foully.

What is doubly frustrating is that a story that should invoke howls of outrage is consigned to the neglected ghetto of the Booker column and noted only by two bloggers – that I am aware of - Tony Sharp and Tim Worstall.

Although an intensely political issue – arising from policy created over several decades which has conspired to turn commercial fishing into a criminal occupation – it has been divorced from the politicians who allowed it to happen.

Worse still, the current generation of politicians are silent and thus, without comment from them, the episode lacks that essential political controversy from which the political "squawkosphere" takes its lead. It too, therefore, is silent, preferring to comment on the soap opera and drama queens rather than the lives of real people destroyed by malevolent officials.

Thus, even now, Booker's story in the print edition is history and the stories of those of us who have commented on it will shortly be consigned to our archives, picked over occasionally when they show up on a Google search but otherwise ignored.

But, while the story might fade, the black hatred does not. One fantasises about running amok with a Kalashnikov in the offices of these dank, foul officials but it remains fantasy. More to the point, it would be a waste of time. Those slaughtered would so easily be replaced and the injustice would go on unchecked.

Sooner or later, though, the dam will break. It always does – history tells us that. It may not happen in my lifetime but, when it does, it will be very messy, very nasty and a lot of innocent people will get hurt. But it will happen and it will do so because a lot of people did nothing about the things of which Booker reports so lucidly.