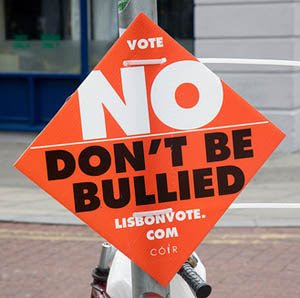 If there ever was received wisdom after the famous Irish "no" vote, it is that the "colleagues" – if they were to have another referendum – would want it before next year's euro-elections. They would be at pains, it was held, to avoid the contest becoming an unofficial, Europe-wide referendum on the constitutional Lisbon treaty.

Now, it seems – at least according to the Financial Times - that the colleagues' worst nightmare is about to come true.

This paper is reporting that the prospects of Ireland holding a second referendum on the treaty before the elections "are receding as differences emerged on Tuesday between parties supporting a 'yes' vote."

This stems from weekend comments by Dick Roche, Ireland's European affairs minister, who proclaimed that a second vote was "appropriate". But both the Greens, members of the Fianna Fáil-led coalition, and the conservative Fine Gael and Labour, the main opposition parties, ruled out the possibility of putting the question back to the people in the short term.

Until this week, says the FT the expectation was that the Irish would put the question, perhaps with a few political protocols attached to reflect Irish concerns, to a second vote. But Irish officials and some diplomats privately concede that it is more likely any second vote will now take place in late 2009.

This may give Declan Ganley, chairman of the "no" group Libertas, the opening he needs to set up his EU-wide political party to take on the treaty – a prospect trailed last July.

More recently, Ganley has been very quiet. He was due to speak at last weekend's summer school but he pulled out at the last minute, pleading "urgent commitments in the US", leaving Fine Gael Senator Eugene Regan to declaim him as "running scared".

If Ganley is not ready to step up to the plate, the prospect of an unofficial referendum in the UK certainly presents UKIP with an opportunity. It could galvanise the euro-elections, especially if the Tory party tries to fight on domestic issues and is unable or unwilling to clarify its position regarding the constitutional Lisbon treaty when or if it gets into power.

In what could be its saviour, UKIP's only nightmare would be Ganley coming up with some serious money and fielding a full slate in opposition to the UK's premier eurosceptic party.

There is, though, the outside chance that the Tories could get their act together and give UKIP a run for their money. On past performance though, their message will not convince enough voters to make the switch in a contest which is now regarded as UKIP's natural hunting ground.

The chance of registering disapproval of the constitutional Lisbon treaty may be so attractive that the electorate will be prepared to resist Tory invitations to make the contest a two-way joust between Conservatives and Labour, in a rehearsal for the electorally mandated reshuffle general election slated to take place the following year.

Time will tell, of course – it always does.