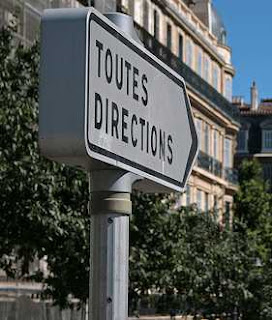 A perspicacious Guardian today notes that the EU is in as much disarray about how to handle the looming recession as it is over how to confront Russia's belligerence in the Caucasus.

Drawing on the experience so many of us have had of baffling French road signs, it suggests that "toutes directions", the often confusing signpost at crossroads in French provincial towns, just about sums up eurozone government responses so far.

Actually, we can do better than that. Attempting to find our way to Strasbourg one day, driving through the by-ways of Alsace completely lost, we came to a T-junction in a small town, unmarked on our map. Witnessed by my increasingly acerbic co-editor, then one of my backseat drivers passengers, we were utterly confounded by a single sign offering the choice between "toutes directions" and "autres directions". That, it seemed to us, was the most appropriate paradigm for the European Union.

Returning to The Guardian, it tells us that France, as holder of the EU presidency, is effectively pushing for a concerted series of activist, counter-cyclical measures to be adopted when finance ministers meet in Nice in the middle of next month - even if it means busting the bloc's three percent budget deficit limit. 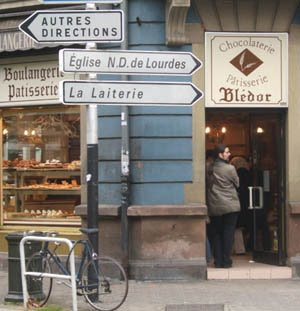 In this – predictably - it can count on support from its "Club Med" partners in Italy and Spain but Germany, determined to maintain fiscal discipline and avoid a repeat of the 1970s, is resolutely opposed. And so is the EU commission, while the UK is out on a limb, together with the Irish and the Nordics (several limbs, actually).

Although it retails a sorry tale of confusion, it is a pity though that the paper cannot see the bigger picture. It is not only the "looming recession" and the question of "how to confront Russia's belligerence in the Caucasus" that finds the EU in disarray. The impending clash over the Common Agricultural Policy will point up yet more disarray, while the continued impasse over GM crop approvals, the disagreement over biofuels and the energy policy generally, are all examples of the EU haring off in "toutes directions".

In fact, from the experience of the Common Fisheries Policy – branded by its own commissioner as "immoral" - to the waste policy, immigration and high level initiatives in the Middle East, nothing the EU touches ever works. It leaves behind it a trail of wreckage, disarray and confusion.

Never more has it ever been more urgent that we in the UK should be looking for that sign which says, "autres directions".