A huge diversion of resources 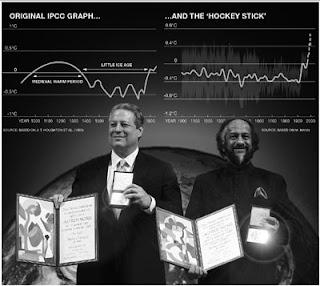 Booker goes to town today on the UN's Intergovernmental Panel on Climate Change (IPCC), charting the intellectual and political corruption behind what must the biggest (and most expensive) scam in the history of the planet.

What is doubly interesting is the way the politicians have bought into the scam, distancing themselves from the bulk of the population. To judge from the comments on the Telegraph website – which are almost entirely supportive - people are growing increasingly sceptic and weary of the preaching of our rulers, as they come up with even madder ideas to "save the planet".

Perhaps though the greatest evil perpetrated by the IPCC is the way it has distorted public policy, elevating "climate change" to the top of the political agenda and thus skewing expenditure priorities and the focus of public administration.

No more so is this apparent than in the energy field where, instead of addressing the complex but technically solvable problems of providing cheap electricity for the masses, policy is totally bogged down by the fantasy of providing for a "carbon-free" future.

Worse still, if we are entering a period of global cooling – which even the "warmists" admit is on the cards, the policy responses required are entirely different from those needed to deal with the warming scenario postulated by the IPCC.

In that sense, the IPCC is directly responsible for a huge diversion of resources, on a global scale, sanctioning policies which have no foundation in reality while diverting attention from the nuts and bolts of good public administration that are needed to keep society functional.

That this group of self-serving politicians and politico-scientists have been able to get away with it, though, is one of those latter-day marvels which defies explanation. As Booker demonstrates, so transparent is their fraud that it is almost inexplicable that the perpetrators have not been run out of town.

Instead, they preen and posture as they collect their Nobel prizes, while the media laud them and perpetuate their propaganda. There is something very wrong with this world, and it ain't global warming.