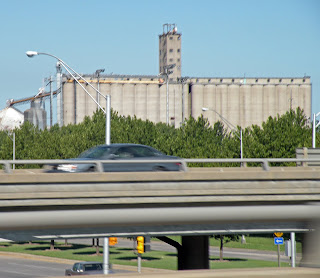 Top news in the US press, alongside Georgia, is the harvest prediction report from the US Department of Agriculture – somewhat indicative of a nation that is still closer to its agricultural roots, rather closer than in the UK where such news tends to be given little prominence.

Although covered in detail in the New York Times and the Wall Street Journal, the best online report – predictably – comes from the Chicago Tribune, the latter conveying the headline message that a bumper crop is expected. Those massive grain silos (pictured) are soon to be full again.

Confounding early expectations, a "fortunate mix of sunshine and rain" has combined to produce this happy event but, say the papers, this won't make much difference to prices because so much of the grain will be used to make ethanol.

This, therefore, creates an interesting paradox – and a warning for us on the other side of the pond, as the EU gets stuck into its "renewables" policy.

There was a time when a bumper crop of corn was welcome news for consumers and livestock producers alike, especially the latter when you remember that grain prices dominate animal feed costs. But, even with a record crop of 12.3 billion bushels expected - 573 million more than it expected last month and second in size only to last year's harvest - ethanol will take more than 30 percent of that harvest. Thus, prices are expected stay high.

It is not just ethanol though. Although prices have retreated from their February highs while inputs costs for fertiliser, diesel and even land are rising, creating a classic "price squeeze" for farmers – even the arable farmers are complaining. Food processors and retailers, on the other hand, are expected to claw back earlier losses, when they were not able to pass on the full increases in raw material prices.

However, despite the influence of ethanol, the Environmental Protection Agency has rejected a request by Texas governor Rick Perry to abandon the ethanol quota (or "mandate"), spurring warnings from livestock and poultry industries that their prices are going to have to go up.

Early signs of distress are already evident. A Utah turkey processor, Moroni Feed Co., is planning to shut down operations for three months after Thanksgiving, a decision the firm, which has $125 million turnover, reached because of the cost of corn.

Meanwhile, the NYT retails a dissenting word from Illinois farmer Dan Meinhart, who does not share the government's optimism about the bumper crop. Having planted late because of the unseasonable weather in the spring, his yields are down. Furthermore, he is seeing signs of early frosts, within six weeks – while it will take him ten weeks to get his crops in.

We are not out of the woods yet – the USDA may be counting chickens (extremely expensive ones) before they have hatched. And, even without that, the greenie agenda is beginning to hurt.