Politics across the pond 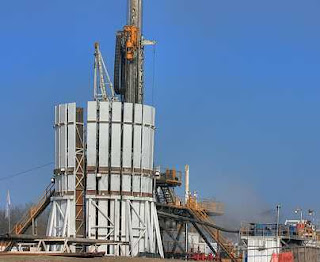 Talk about energy supplies to people on this side of the pond and it will not be very long before the subject of shale comes up – a major new source of natural gas in the United States.

It is that which provides in part an explanation for the phenomenon we reported on this blog last week - the extraordinary situation where consumers across the globe and especially in Britain are paying hugely more for their gas while US consumers are enjoying substantial price cuts.

Coincidentally, in the Wall Street Journal today (no link), there is a long piece which remarks on precisely this, telling us that US natural gas companies are actually facing a problem of what to do with all the gas they are producing, with analysts talking about a potential "gas glut".

The big turn round came in the1990s, with the development of technologies which enabled drilling companies to extract gas from shale – dense rock formations which hitherto had resisted exploitation. By pumping in pressurised water, the gas can now be released, which has led to the development of the Barnet Shale, a massive field in Fort Worth, Texas which now produces about four billion cubic feet of gas per day, some 6.5 percent of total US production.

Following this success, new exploitable fields have been found, most recently the Haynesfields Shale in northwest Louisiana and East Texas, estimated to hold "staggeringly large" reserves of 250 trillion cubic feet of recoverable gas.

Overall, it is now estimated that US shale reserves could amount to 850 trillion cubic feet, equivalent to 140 billion barrels of oil, more than half the proven reserves of Saudi Arabia.

Interestingly, today's New York Times features not this news but a story on how American supermarkets, amongst them Wall Mart, are turning to solar power to "reduce energy costs", the piece also telling us that, currently, it costs about 6 cents per kilowatt hour to produce electricity from coal, about 9 cents from gas and between 24-30 cents to deliver the same amount from solar panels.

Of course, the only way this latter option makes economic sense is if the cheaper options are made more expensive by the imposition of carbon tariffs, such as was proposed recently in the Lieberman-Warner Bill, copying the EU's emissions trading scheme (ETS).

Over here, this sort of stupidity is seen for exactly what it is amongst conservative circles, to the extent that we see a refreshing distinction in philosophies over the political divide, as opposed to the leaden consensus between political parties in the UK and elsewhere in Europe.

Asked why there is not the same of opposition in the UK to the ETS as is growing to the "cap and trade" equivalent, and I tell people that is because, in the UK, in key respects, we no longer have a government in Britain. For key strategic decisions, our government is in Brussels.

So it is that our politicians do not talk about such issues, which are central to political discourse over here, giving eloquent testimony to just how much power we have ceded to the EU. If we were truly an independent nation, such issues would be at the top of our political agenda, as they are in the US.

And that is why Booker and I are over in the States, giving talks to appreciative audiences while in Britain, the political classes are mute.