Joining up the dots … 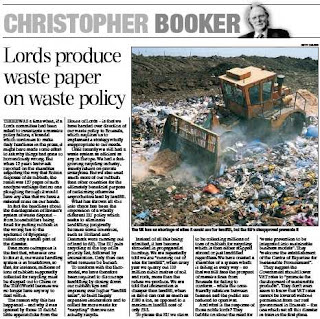 Of all the terrible things happening in this world, it would be easy to forgive the view that the slow-motion disaster of our waste policy was one of the least important.

However, in the grown up world, there are connections between different policies, not least in terms of the expenditure implications. And where – as is the case – the massive cost of this disaster is draining wealth from the productive economy and adding to the burden of taxation, that has all sorts of implications for expenditure elsewhere.

To put it bluntly – and at its most simplistic – if we are spending billions unnecessarily on waste disposal, which indeed we are, then that money cannot be used to buy more armoured vehicles for our troops in Afghanistan, more day care for elderly people or drugs to treat cancer patients. The money can only be spent once.

So it is that what is happening to Britain's waste is important, something we pointed up in our piece in January 2006 and many times since in the forlorn but continued hope that somewhere, grown-up politicians might take up the issue and actually do something about it.

Traditionally, those grown-up politicians are mostly found in the House of Lords, in theory a repository of wisdom and common sense, where issues of the day are dissected and examined, from which sensible solutions are proposed. But no more.

If there was ever a good example of the decay in the fabric of our body politic, it is, as Booker points out today in his column, last week's report from the House of Lords Science and Technology Committee on Waste Reduction.

There was a time, writes Booker, when, if a Lords committee had been asked to investigate a massive policy failure, a scandal which continues to make daily headlines in the press, it might have made some effort to ask why things had gone so horrendously wrong. But, he says, when twelve peers last week reported on the shambles engulfing the way that Britain disposes of its rubbish, the result was 127 pages of such anodyne verbiage that no one ploughing through it would have any idea that we have a national crisis on our hands.

However, in the comments to his piece on the Telegraph website, Booker is taken to task for making such a broad-brush criticisms when the report ostensibly confines itself to one aspect of the waste policy, namely "waste reduction". But that the inquiry and report have been so tightly framed itself tells a story.

The point, of course, is that their Lordships themselves decide the scope of their own inquiries and, in this event, have focused on one small part of the issue without dealing with the larger problem.

But, from any reading of their report, what immediately becomes apparent is that many of the problems they isolate derive from the framing of the waste policy as a whole. They are a consequence of the broader policy and cannot be addressed without reviewing that policy. In that context, their Lordships are fiddling while Rome burns.

Specifically in terms of their inquiry, industry witnesses constantly refer to the tightness of the definition of waste within the meaning of the EU's waste framework directive. This means that millions of tons of materials which industry could rightly consider as by-products or raw materials becomes defined as waste. By this means – effectively by bureaucratic diktat these materials enter the waste stream, when any more rational policy would have excluded them.

A classic example it the treatment of pulverised fuel ash – the residue from coal burning in our power stations. Some 8 million tons of this is produced each year and it is widely used as a partial cement substitute in the manufacture of breeze blocks, with many other applications in the construction industry.

Yet, despite such uses – a fine example of one industry's waste becoming the raw material for another – it is caught in the EU's definition of waste, with its incumbent costs and bureaucracy.

As a result, contracts for producing grouting material, involving at least 500,000 tons, have been lost as manufacturers have turned to virgin material, the use of which avoids the mind-numbing paperwork and additional costs in dealing with the waste legislation.

Another example was cited by Booker in his column in March 2004. This involved Ross Donovan, the engineer who had developed a heating system fuelled by the used cardboard packaging that businesses generate in such quantities. More than £300,000 was put into proving its effectiveness, and at every step Mr Donovan consulted the Environment Agency to ensure that it complied fully with EU rules on waste and incineration.

Then at the last minute the agency took another look at the legislation and ruled that Mr Donovan's cardboard was not an "energy source" after all, but "waste", and he would have to fit his furnaces with costly monitoring equipment which would make them unviable. Yet the same fuel obtained directly from a packaging manufacturer would not be "waste", and the rules would not apply.

Once again, solely by bureaucratic diktat, material which would otherwise have had an economic use had been defined as "waste", thereby needlessly entering the waste stream.

Yet another example we gave recently, where the burden of bureaucratic controls had rendered the widespread use of anaerobic digesters uneconomic, thereby again causing - by now – millions on tons of material to enter the waste stream when it could have been used to generate heat or electricity, and produce high volumes of peat substitute for use by gardeners.

This is but one aspect which is glossed over by the Lords, a single facet of the waste policy which, if addressed, would have more impact than the whole of the recommendations they actually made.

Dealing with a report of 127 pages, however, we cannot in the space of one post, even begin to do justice to its fatuity – and, if we did, no one would read it. Nor indeed did the media read the report when it was published last week, relying instead – as usual – on the pre-digested press release which told them what to think.

Thus did the Lords get away with, as Booker puts it, babbling on about the need for "waste prevention to be integrated into sustainable business models", while they welcomed "the establishment of the Centre of Expertise for Sustainable Procurement".

Even their suggestion that the government should lower VAT rates to "promote the development of sustainable products" passed by the media without critical comment. They don't even seem to know, Booker remarks, that VAT rates cannot be lowered without permission from our real government in Brussels - the one which set all this disaster in train in the first place.

Between our legislators and our gifted media, it seems there is no chance of us ever learning of the extent to which the EU has destroyed our systems of governance, nor what its depredations are costing us. And, if they are not prepared to do the job, who will?