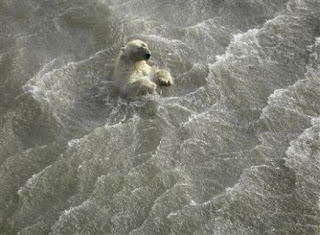 Suckered by what very much appears to be a "plant" by the World Wildlife Fund (WWF), two British newspapers have visited the "drowning polar bears" story today. In so doing they exhibit a gullibility that, in more serious times, would render them laughing stocks.

First out of the traps is The Daily Telegraph, with an online story headed, "Nine polar bears at risk of drowning in global warming meltdown" accompanied by the picture shown (above left).

Although the story in the print edition is heavily truncated, both it and the online version tells us that, "Nine polar bears are at risk of drowning after the ice floe where they lived melted because of global warming, scientists have said."

The bears, we are then told in the online version, were spotted in open ocean off the northwest coast of Alaska, miles from their normal hunting area by US government oil survey scientists flying over the Chukchi sea.

Continuing the drama, we then get: "Although land was initially only 60 miles away from the bears' former home, they were driven north by their homing instinct towards the edge of the Arctic ice shelf. Polar bears are renowned as strong swimmers but the 'lost' bears now face an epic 400-mile swim back to shore."

In The Daily Mail, of course, we get an even more lurid account, the paper relying on the same photograph to paint a picture of utter desperation. "Struggling against the waves, this polar bear faces almost certain death after becoming lost at sea in the Arctic," intones the paper, adding:

It is one of a group of nine to have plunged into the ocean after the ice float they lived on melted. The bears were spotted miles from their normal hunting ground by U.S. government oil survey scientists flying over Alaska's Chukchi Sea. They said the creatures' homing instinct has sent them north towards the edge of the polar cap instead of 60 miles south towards the nearest land.

And, to the picture it appends the caption: "Scientists found this polar bear swimming in Alaska's Chukchi Sea and fear it and eight others will drown in an impossible 400 mile swim back to shore."

What immediately comes over is the present tense: "Nine polar bears are at risk …" with thus no clue to the reader that the incidents on which this story is loosely based actually happened on 16 August – two weeks ago. If the bears had been at serious risk of drowning, they by now they would be dead – it would all be over.

The second remarkable point is the reference to the melting ice flow on which these polar bears reputedly lived. This is pure, unadulterated fiction. As readers will recall – borne out from the original report -observers spotted the bears already in the water. Furthermore, there are no indications that the nine (or ten) bears was one specific group. Not least, the count was made over two separate flights.

What settles the issue though is the word of the project director Janet Clark – absent from the Mail and Telegraph reports. Many were swimming north and ranged from 15 to 65 miles off shore, she reports, but the animals' origin and destination could not be known without radio collar monitoring. "To go out there and say they were going from this point to this point would be complete speculation," she confirms.

We can also recall Susanne Miller - the biologist in charge of the polar bear project for the federal Fish and Wildlife Service – saying that eight of the ten bears spotted had been within 15 miles of shore. One had been 35 miles from shore and another one 50, but neither was more than 20 miles from the nearest arctic ice.

In other words, the account offered, with lurid visions of drowning polar bears is complete and utter tosh – based on two chance sightings which have then been embellished far beyond anything that can be supported by the original information.

What gives the game away though are the multiple references in both newspapers to the WWF, with the Mail even attributing the polar bear photograph to Geoff York, the "polar bear coordinator for WWF's Arctic Programme". We also get Margaret Williams, Director of WWF's Alaska office, bleating that, "The Arctic is a vast ocean and to find nine bears swimming in one area is extremely worrying because it means that dozens more are probably in the same predicament."

She adds that animal groups were considering asking the US government to send a Coast Guard ship, like a modern Noah's ark, to rescue some of the bears.

It is no coincidence that the WWF is running a high profile fund-raising campaign to milk public concern over polar bears, asking donors to commit £2.50 a month to "help us (WWF) save the polar bear and its home from the effects of climate change and pollution."

Clearly, this naked "greenspin" has its effect. With 27 comments on The Daily Mail site, almost all express varying degrees of shock and concern, some offering donations to help save these unfortunate creatures. It is not only the papers which are gullible, but the readers as well.

However, the Mail actively censors moderates its comments, so it would not allow a comment from this blogger pointing out that the story was already two weeks old, the claims unsupported by the evidence.

That moves the issue from simple gullibility to active conspiracy to mislead. The story is deeply flawed and The Mail, at least, knows it. But, while the media is always very quick to criticise others, it never shows any enthusiasm for correcting its own errors – especially if in so doing it has to contradict its own narratives.

In the meantime, the treatment of this story demonstrates yet again that the media cannot be trusted to report accurately or objectively, especially on "green" issues. But then we knew that already. What is worrying is the number of people who still do believe what they read.