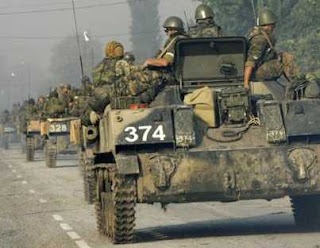 As Russia replaces its combat troops with "peacekeepers" in Georgia, thereby making a mockery of the international "community" and in particular M. Sarkozy who brokered what passes for the withdrawal deal, the commentators are picking over the bones of what is left of the EU's fabled common foreign policy.

Pre-eminent in this noble task is John O'Sullivan who notes how the conflict in Georgia has brought into focus the stark divisions in the political structure of the world, arguing that it "is really a three-way struggle between authoritarians, national democrats, and global legalists."

And, while one might expected the "global legalists" to have rushed to the barricades to defend the "international norms", the odd thing, writes O'Sullivan, is that when the crisis broke, it was the national democrats from whom the show of solidarity with the Georgians came.

Thus, he avers, the EU argument that pooling sovereignty leads to greater real power proved to be a sham - it led in practice to collective impotence and self-deception. This post-modern war has proved the limits of soft power and the emptiness of global legalism without roots in democratic support.

If the Georgian conflict has proved a blow to the self-esteem and ambitions of the "colleagues", however, already the camp followers are attempting to pick up the pieces.

In the Irish Times this weekend, John Palmer - founding political director of the European Policy Centre in Brussels and previously European editor of The Guardian - makes a case for a new post-conflict relationship between the EU and its eastern neighbours.

Amazingly, he argues for a "United Commonwealth of Europe", which would include Russia and the former Soviet satellites, within the framework of the Council of Europe. This, suggests, would replicate the EU's own arrangement for deciding issues of mutual interest "through both co-operation and a degree of sovereignty sharing."

Acknowledging that Russia under Putin's authoritarian rule "may neither qualify for nor be interested in membership" (how could he do otherwise - when did Russia ever "share" sovereignty?), Palmer still contends that this is a strategy which would attract Russian democrats who have always aspired to be part of "the European family".

But, at the heart of Palmer's piece is a lament that the European Union could play a more constructive role only "if it could overcome its own internal divisions," with that observation that "EU governments seem bereft of ideas for a long-term strategy to overcome a looming new division on the Eurasian continent."

Indeed, that is the reality. As my co-editor so often observes, there is no common interest between the 27 disparate states of the EU and without that, it is difficult to see how they can cobble together a coherent – or any – long-term strategy.

This, though, does not mean it will not continue trying to pull its mad edifice together and, come the autumn political season, we will see many pronouncements from the "colleagues" on the direction to take.

Nevertheless, more and more, it is becoming apparent that the EU is a wounded animal, stranded by its own unrealistic ambitions, compounded by its complete lack of ability to deliver. All the talk in the world will not fix this problem, which can only get worse as that inconvenient reality continues to intrude. In Georgia, therefore, we may just have seen the high-water mark of European ambitions.