No news is not good news 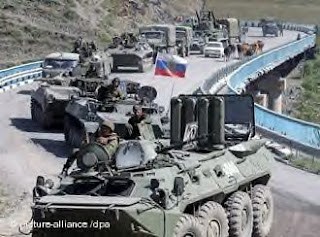 Apart from the Beijing Olympics, where the Russians seem to have won a silver medal for some kind of shooting (there's a surprise), there is only the Caucasus to write about. Maybe that silver medal will keep the Russians happy for a while.

So here is a brief summary of what I have gleaned from various sources, mostly in Russian. The number of casualties are under dispute. The Russians maintain 1,400 or 1,500; the Georgians disagree; the South Ossetians are busy being evacuated to North Ossetia, which is in Russia or being brought back. Some of the South Ossetian officers have come up with extraordinary and so far unsubstantiated tales of Georgian officers throwing handgrenades into basements where women and children are hiding out. Sounds a little like all those tales of "Jeningrad" but, I suppose, one cannot tell.

Mikheil Saakashvili has called for a cease-fire and has declared a military situation in Georgia itself. Russian jets have bombed Gori and other targets inside Georgia, well outside South Ossetia. Georgians maintaint that the Russians have been trying to bomb oil pipelines but missed.

Former President, now Prime Minister, Putin has gone to Vladikavkaz in North Ossetia to sort things out, presumably the way he has been sorting matters out in the other parts of the Caucasus. He has also claimed that Georgia's actions in South Ossetia amount to genocide.

The UN Security Council has failed to agree on action. American and European officials have sped to Tbilisi to try to negotiate a cease-fire. I have put up more details on the BrugesGroupBlog but the situation remains murky.

However, for the benefit of some of our readers I shall try to define the arguments used by the present-day appeasers. They are surprisingly familiar. Here goes: Russia is being victimized by the nasty evil Western imperialists in the shape of Georgia becoming pro-Western, more or less democratic and, possibly, economically far more successful than Russia itself. Therefore, Russia has every right to assert her influence in the region and protect her interests. The West, on the other hand, has no right whatsoever to support its ally or to ensure that Russia does not control the entire flow of oil from the Caspian region. There, that sums it up.

I have been challenged by another blogger to come up with an answer to the question of what is to be done now. So far, I have managed three different versions but none satisfactory. Maybe tomorrow.
Posted by Helen at 00:05