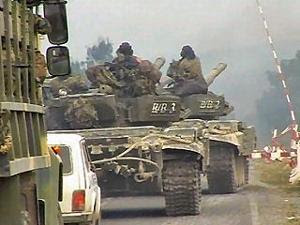 Whatever the outcome of the Russian escapade in Georgia, the one thing on which most commentators seem to agree is that the EU has not come well out of the experience.

Few, however, are as forthright as US columnist, J R Nyquist, writing for Global Analaysis who has decided that Moscow's "blitzkrieg" in Georgia is more than a military campaign.

It is designed, he writes, to empower Russia's diplomatic strategy, which seeks to make the European Union the West's chief representative in future negotiations with Russia. Quite naturally the Kremlin wants to escape the logic of U.S. and NATO policy, which is to contain Russia within her national borders.

The logic of this, according to Nyquist, is that the European Union is an entirely different animal: "toothless, utopian and ready to please." Better to deal with this organisation than a tough nut United States. Today, he continues, the European Union confronts Russia in the same way Neville Chamberlain confronted Hitler in 1938; being outwitted and tricked in the cease fire negotiations, there is no possible outcome other than appeasement.

Pointing at Sarkozy's "triumph", he notes now the Russians insisted that their troops were accepted as peacekeepers in Georgia and the French mediators caved in and allowed this. Thus, the stipulated withdrawal of combatants does not apply to Russian troops.

Under this ceasefire agreement Moscow can claim – in a strictly legal sense – that Russian troops can stay in Georgia indefinitely. President Medvedev and Prime Minister Putin are laughing at the French while observing international law. Meanwhile, occupied Georgia is looted and burned; Georgian ships are sunk and the Georgian capital is strangled.

Nor is the purple prose confined to the commentators. My co-editor has already taken a side-swipe at the Common Foreign Policy - when she featured our favourite Polish politician - but, it appears, dear old president Lech Kaczynski was only just warming up.

To the Rzeczpospolita newspaper yesterday he declared that the EU was "too soft on Russia", complaining that it should have been more critical of Russia's military assault on Georgia, with the bloc making clear to Moscow that "imperial times have ended".

As for the Common Foreign Policy, this he said was dictated by France and Germany. "Once again it turned out that, in actuality, decisions of this organisation (the EU) were being taken between Berlin and Paris. (French President Nicolas) Sarkozy agreed the position with Chancellor Angela Merkel, whose voice proved to be decisive," Kaczynski said.

He also complains that the French deal lacked a key element – recognition of Georgia's territorial integrity, adding that he believed the EU reaction "should have been more decisive."

With all that, it was a "joke" to suggest that the 27-nation EU had a common stance. Then speculating on what such a policy would be, he had but one word, "submissiveness".

Perhaps the biggest joke of all, however, is perhaps our own politicians, whose posturing has been noted, even by the Independent. Gordon Brown and David Miliband, we are told, "merely mouthed empty platitudes about the crisis".

What this rabidly europhile newspaper does not say, though, is that there is a "common position" on relations with former Soviet satellites and Russia. Therefore, any dealings must go through the EU presidency – in this case the egregious Sarkozy.

That is indeed the ultimate joke. Great Britain, once the head of an empire on which the sun never set, is reduced to a bit part, while a French president supposedly represents our interests. And all because our political class is so enamoured of the EU.