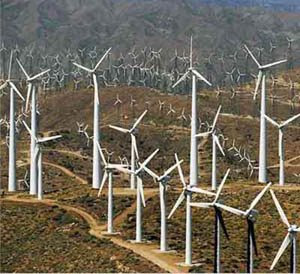 Almost in the category, "you gotta laugh", the Wall Street Journal today recounts the extraordinary contortions of the greenies, hoist with their own petard.

With the Democrats embracing an "anything-but-carbon avant-garde" – as the paper puts it – they are finding that, when wind and solar power do start to come on line, they face a familiar obstacle: environmentalists and many Democrats.

Specifically, the problem with renewables is that the best sites are out in the sticks and, to connect them up to the grid, new transmission lines are needed. Yet, while the greenies are swooning over the prospect of more wind and solar power in the deserts and plains of America, they are contesting the construction of the power lines needed to bring these installations into production.

Only last week, we are told, Duke Energy and American Electric Power announced a $1 billion joint venture to build a mere 240 miles of transmission line in Indiana necessary to accommodate new wind farms. Yet the utilities do not expect to be able to complete the lines for six long years - until 2014, at the earliest - because of the time necessary to obtain regulatory approval and rights-of-way, plus the obligatory lawsuits.

In California, home of greenie theology, hundreds of treehuggers turned out at the end of July to protest a connection between the solar and geothermal fields of the Imperial Valley to Los Angeles and Orange County. This same greenie class is likewise lobbying state commissioners to kill a 150-mile link between San Diego and solar panels because it would entail a 20-mile jaunt through Anza-Borrego state park.

Even the latter-day greenie, Arnold Schwarzenegger, is losing patience. "It's kind of schizophrenic behavior," he complains. "They say that we want renewable energy, but we don't want you to put it anywhere."

Even in oh-so-green Oregon, the utility companies are having problems. Once people realised that transmission lines would cut through forests, all sorts of obstacles have been raised. Transmissions lines from a wind project on the Nevada-Idaho border are clogged because of possible effects on the greater sage grouse. Similar melodramas are playing out in Arizona, the Dakotas, the Carolinas, Tennessee, West Virginia, northern Maine, upstate New York, and elsewhere.

In other words, says the WSJ the "liberal" (code for illiberal) push for alternatives has the look of a huge bait-and-switch. Washington responds to the climate change panic with multibillion-dollar taxpayer subsidies for supposedly clean tech. But then when those incentives start to have an effect in the real world, the same greenies who favour the subsidies say build the turbines or towers somewhere else. The only energy sources they seem to like are the ones we don't have.

Of course, we are experiencing exactly the same dynamic over here, as the greenies get their knickers in a twist over the conflict between saving the little tweetie birds and indulging in their wet dreams of a carbon-free future.

But then, since the real greenie agenda is to force us back into the Stone Age – as long as we don't light any fires with our flints – this sort of confusion is grist to the mill. There is nothing quite so carbon-free as no power at all – the inevitable consequence of this greenie schizophrenia.