The propaganda marches on 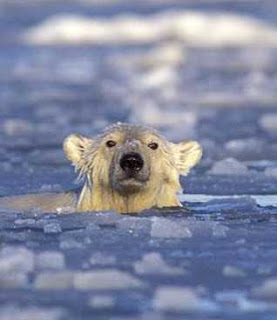 There was much twittering in the warmist dovecotes yesterday, typified by a piece in the (not) Science Daily which reported breathlessly that an aerial survey by government scientists in Alaska's Chukchi Sea had "recently found at least nine polar bears swimming in open water – with one at least 60 miles from shore". This, inevitably, was cited as "raising concern among wildlife experts about their survival."

Thus we had Geoff York, the "polar bear coordinator for WWF's Arctic Programme," (I wonder if polar bears appreciate being "coordinated") saying that "when polar bears swim so far from land, they could have difficulty making it safely to shore and are at risk of drowning, particularly if a storm arises."

Continuing in doom-laden terms, he adds: "To find so many polar bears at sea at one time is extremely worrisome because it could be an indication that as the sea ice on which they live and hunt continues to melt, many more bears may be out there facing similar risk."

Needless to say, no reference to polar bears would be complete without the statutory reference to "climate change" and York does not disappoint. "As climate change continues to dramatically disrupt the Arctic, polar bears and their cubs are being forced to swim longer distances to find food and habitat," he says.

Then we get the theology:

The bottom line here is that polar bears need sea ice, sea ice is decaying, and the bears are in very serious trouble. For any people who are still non-believers in global warming and the impacts it is having in the Arctic, this should answer their doubts once and for all.

However, a slightly (I do say slightly) more balanced version of the same story appears in the New York Times. This has Susanne Miller - the biologist in charge of the polar bear project for the federal Fish and Wildlife Service – saying that eight of the ten bears spotted had been within 15 miles of shore. One had been 35 miles from shore and another one 50, but neither was more than 20 miles from the nearest arctic ice. The story then records Ms. Miller saying:

It's not unusual for bears to be swimming, but depending on their condition and how much time they're spending in the water, this could be problematic. It's going to cost them more energy to swim through water than travel on land.

In addition, Miller tells us, more bears have been sighted on land in July and August than in the past — a possible result of the retreating of the sea ice. "But it's not a clear-cut situation," she says, noting that most bears captured this spring on the ice in the Beaufort and Chukchi Seas have been in good condition. So have several bears caught on land.

That sort of rather puts a different complexion on the whole story, and especially when one reads an article from August 2005 which announced that scientists had tracked a tagged polar bear swimming "at least 74 kilometres in just one day - and maybe up to 100 kilometres". This, went the story, provided "the first conclusive proof the bears can cover such giant distances in the water."

What comes over from this is how little in fact we know of the behaviour of polar bears and how recent what knowledge we have actually is. Effectively, up until three years ago, we had no evidence that polar bears were accomplished long-distance swimmers.

So startling was the discovery that, at the time, Jon Aars, a researcher at the Norwegian Polar Institute, said that it showed that polar bears could in many ways be classified as marine mammals - a group including whales and dolphins.

Should they in fact be "marine mammals", it is hardly surprising that, this year, one should be seen 35 miles from shore and another one 50, "but neither … more than 20 miles from the nearest arctic ice."

But what is particularly offensive about this current story comes from the tail end of the NYT piece which reports that the biologists made the new sightings from an aircraft on two flights on 16 August at an altitude of 1,200 feet, telling us that the survey was "looking for bowhead whales in an area of the Chukchi Sea".

In other words, the swimming bears were chance sightings in a remote region of the world, about which there is little information, rather than observations within a strictly controlled, structured survey where results could be fitted into a larger context.

Conclusions from such random sightings are meaningless. The events were mere curiosities which support none of profound, doom-laden analysis offered by Geoff York.

Needless to say, none of the many papers reporting this story – some at great length – bother to note that the ice meltback in the Arctic has stopped, perhaps a month earlier than might have been expected, and that the ice is back on the march. That does not fit the narrative, one that has only a passing acquaintance with news and which has everything to do with greenie propaganda.