Start as you mean to go on 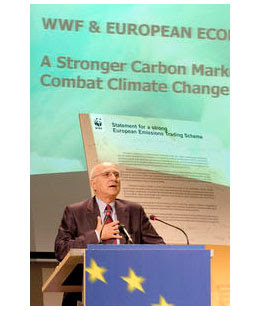 The Bali jamboree climate change conference is likely to provide us all with a great deal of entertainment or high blood pressure, depending on how you look at these matters. We have already called attention to the amount of carbon emission that the world, which is about to breathe its last, will be polluted with by the numbers of people who are converging on this rather lovely island.

Moving on from there, the disinformation has started. As EUOberver reports, Stavros Dimas, the Environment Commissar who is taking a pitiful entourage of only 90 people to the Bali junket important summit, has given a press conference in which he announced that the five-year plan has been over-fulfilled.

Just days before an important global conference on setting future environment targets, the EU announced it has cut the link between economic production and rising pollution and that it will meet its own international commitments to reduce greenhouse gas emissions.

"Our emissions are currently 2 percent below [1990] levels (…) while our economy has grown by more than 35 percent over the same period."

The commissioner also said that "it is almost certain" that Europe will meet its goal of cutting its carbon dioxide emissions by 8 percent by 2012 – a target agreed and shared under the Kyoto protocol by 15 EU member states in the late 1990s.

Well, it ain’t necessarily so, as one inevitably has to say after every press conference given by a politician, even a shoddy one like the average Commissar.

As EUObserver points out:

However, the commission's pronouncement on achieving the target is dependent on getting member states to toe the green line in the coming years, with national governments' holding a patchy record on the issue.

According to Mr Dimas, the EU will cut its emissions by 7.4 percent using extra measures such as buying emissions from third countries but will only be sure of meeting its 8 percent commitment if member states agree to putting other tools in place – such as including airlines in the EU's pollution reducing scheme.

Green politicians have said that the commission's announcement covers up the fact that individual member states are not doing very well on their Kyoto commitments.

"The figures presented by the Commission show that the EU is totally reliant on developing countries for emissions reductions, with the figures far from positive as regards real emissions from EU countries," said a statement by the Greens in the European parliament.

So these figures are smoke and mirrors and, as Commissar Dimas, if not the Green politicians, knows full well, impossible to achieve.

Over the Pond in the Competitive Enterprise Institute they have noticed something else. Chris Horner analyzed Commissar Dimas’s statement on Globalwarming.org and came to the conclusion that the man was being somewhat economical with the truth.

Reader, beware. Europe has quietly swapped out one “we” for another, such that the “we” Dimas refers to now is the EU-27, a whole ‘nother kettle of fish. This does not reflect the performance of “Europe” according to Kyoto, which is the EU-15, or “Old Europe”.

The remaining States only afford such rhetoric by bringing to the table an emissions inventory well below their 1990 baseline, due to economic collapse, an artifact of political history unrelated to the Kyoto agenda.

This is not pedantic picking of nits, but revelation of a rhetorical ploy meant to assist political pressure against, well, us. Instead, it is significant because Europe as Kyoto recognizes it cannot ride the post-1990 economic collapse to a claim of “emission reductions, while growing the economy!” Even in the EU-27, emissions are actually well above where they were when the economic growth to which he refers began, in the late 1990s.

It is also a breathtaking statement to claim not that Europe will meet its Kyoto promise – which allows for the purchase of offsets for their emissions overage –
but to assert that it will cut emissions by the promised amount. In truth, the most optimistic (that is, Brussels’) projection of EU performance has them leveling emissions off at 1990 levels, which means they would buy the entirety of their “reduction”. Others aren’t quite so rosy. Still, that’s fine if that’s the game we agree to play. But drop the breast-beating about having “reduced emissions” by 8% through the courageous act of paying the Chinese to ramp down their HFC production.

The writer also uses a wonderful word that I wish we had thought of on this blog: Kyotophiles. Perhaps, we can develop that and talk about Kyotophiliacs.

Incidentally, Chris Horner’s colleague, Iain Murray calls attention to an interesting fact: climate change or global warming is not making much of an appearance in the never-ending (or so it seems at times) American presidential campaign. No serious contender on either side has mentioned the issue for a long time. Go figure.
Posted by Helen at 18:13