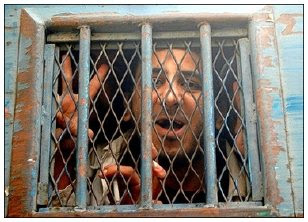 It is hard to know where to start if one wants to deal with the real oppression of journalists, internet writers and bloggers in the world. There is a great deal of it around and, as our readers may have noticed from the blog, we do not consider our own position to be anything but very fortunate.

(My colleague might disagree with that. His position involves having to deal with my eternal cynicism.)

We wrote about the case of Kareem Amer, the imprisoned Egyptian blogger, who had dared to defy the might of the state, here, here and here.

Kareem Amer has been sentenced to four years' imprisonment, "three years in prison for insulting Islam and the Prophet Muhammad and inciting sectarian strife and another year for insulting President Hosni Mubarak". That would be the President Mubarak who expressed shock at the execution of Saddam Hussein and whose country has offered to host the 2009 UN Internet Governance Forum.

In some ways the case of Kareem Amer has become the symbol of the suppression of freedom on the internet and worldwide demonstrations have been organized, calling for his release. There will be a number of them tomorrow, November 9, including one in London.

The demonstration will take place in the afternoon, with people assembling at Green Park Station at 3 o'clock. More details here. I realize it is not easy to take time out in the afternoon but anyone who can should support this cause in the name of freedom.