Falling out over thieves 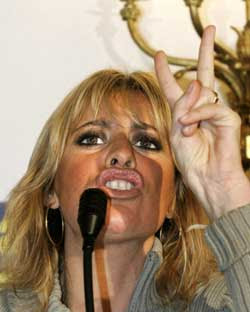 If nothing else, she was always good for entertainment in an often drab chamber, and delicious eye candy. But now she has really put her foot in it.

We are talking here of the gorgeous Alessandra Mussolini, grand-daughter of the war-time dictator, now MEP in the toy parliament and member of the "extreme right" political group in the EP, which calls itself "Identity, Tradition, Sovereignty" (ITS).

However, according to EU Business and others, the group is now facing collapse after Alessandra "insulted the Romanian people" by telling a Romanian newspaper that, "Breaking the law has become a way of life for Romanians ... it is not about petty crimes, but horrifying crimes, this one gives goose bumps."

Adding insult to insult, she described the Romanians as "habitual lawbreakers" and suggested that the Romanian ambassador to Italy should have his credentials removed.

The trouble is that ITS also includes five members of the Greater Romania Party (PRM). They have been mortified at Alessandra's "xenophobic attitude" and pulled out of the group. This brings the number of MEPs below the magic 20 figure which the parliament requires for the formation (and continuation) of a group, membership of which brings substantial riches, speaking rights and other procedural benefits.

French MEP Bruno Gollnisch, who leads the group, says that he had tried without success to contact PRM's leader Corneliu Vadim Tudor, a man who, himself, has been accused of xenophobia and anti-Semitism. And now, it appears, he is conceding defeat: "With the exit of the five Romanian MEPs, who became independents again, the Identity-Tradition-Sovereignty group disappears," his group spokesman says.

Meanwhile, EU commission president José Barroso is reported to be calling for a "uniform EU immigration policy". He told a meeting of the Assembly of European Regions in Udina, northern Italy that, "It's absurd to have 27 immigration policies in Europe."

The poor dear doesn't seem to get it. As far as intra-community migration goes, we do have a uniform policy – it’s called Directive 2204/38/EC.

Nevertheless, Barroso asserts that a joint EU immigration policy should seek the middle ground between opening the doors to all, which he said would be "irresponsible" - which is just what the EU has done - and one of "turning inward, which would contribute to xenophobia."

Given the effects of the current common policy, perhaps he should have words with Alessandra. She seems to have some recent experience on the issue of xenophobia – unless, of course, the Romanians get there first with a European arrest warrant.