More on those pesky Hungarians 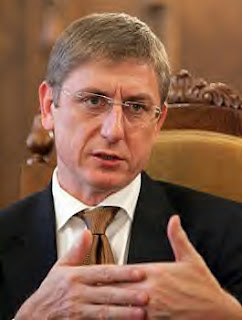 After my last posting on Eastern Europe (not just Hungary, please note) I was called to order by various people. It seems that when I was quoting another article I was guilty of agreeing with it. Equally, I appear not to have made it clear that Magyar Nemzet (a right-wing newspaper) is really just a racist rag.

I did, however, make it quite clear, before branching off to other East European countries that I thought political tensions were high in Hungary, that there was a great deal of polarization and that, in my opinion, most people would probably prefer both political sides to butt out of their lives.

Nothing in the comments and criticisms inspired me to change any of that.

I suspect, furthermore, though at present I have no direct evidence, having not been in that country since the beginning of 2005, that most people are a tad fed up with the way the various political parties and groupings are kicking the 1956 Revolution around like the proverbial political football.

Enough already. The country has moved on. Many things have happened since those memorable days. It is true, that there has not been a rigorous and unbiased history of the events but one lives in hope.

For myself, I do not think I need to write about it again, having covered the Revolution at some length at the time of the fiftieth anniversary, having predicted correctly before the anniversary that there would be trouble on the day and having subsequently written several times about the riots and the bloody suppression. In the course of one piece I wrote:

We are not seeing another uprising, which is just as well, since a good deal of it was very nasty, indeed, even before the Soviet tanks rolled back and it was put down with great brutality. There were many scores settled in an unpleasant fashion and the overwhelming majority of people hid in shelters, hoping that there would be no searches for those who had any kind of an official job, however lowly.

Those who have real memories of those events may well find that these are somewhat more ambivalent than present accounts are to be believed, though the astonishing courage and achievement of those almost insanely brave men and women does need to be saluted.

History matters. It matters particularly in the East European countries where recent history has been convoluted, nasty and brutish. The EU is beginning to get the measure of those problems but, frankly, if they had listened to me they would have known all this was coming.

On Friday the International Herald Tribune decided to ignore those events of 1956 and concentrate on the present situation by publishing a reasonably friendly interview with the Prime Minister. Ferenc Gyurcsány.

I have to admit that I am not a fan of the man, who became a successful businessman in Hungary in the nineties, a rather dubious distinction. The rest of the country was going through an appalling inflation and huge economic upheavals.

Before that he had started his political career in the Young Communist Alliance (KISZ) and there have always been serious doubts about his real ideology. For a while he kept Hungary economically close to Russia but that may be changing and when he announced that the Nabucco pipeline, a possible alternative to reliance on Russia for energy supplies, was not being built fast enough, one had to sigh in agreement.

For all of that, his manoeuvrings to be as close as possible to Gazprom is not seen as a sensible solution by everybody

But did Gyurcsány’s strategy to earn favor with the Kremlin get Hungary any relief? Or is the country headed toward a new version of Goulash State Corporatism no matter what?

Indications point to the latter, as the latest protectionist move by the Hungarian government to allow its largest energy firm, MOL, to block unwelcome foreign bids via „Lex MOL” legislation is raising some eyebrows - illustrating at once a failed energy strategy and Gazprom’s tactics of disaggregation.

Gyurcsány’s argument is that his country as most of Eastern Europe relies heavily on Russia and that is the political reality. His task is to manoeuvre so that Hungary is a partner rather than a subservient of Gazprom and the Russian government though whether discarding being part of Nabucco as a possibility is a sensible way of negotiating remains questionable.

The interview in the Trib concentrates on domestic economic matters in which the Socialist government has proved itself to be less socialist than expected and has advanced ideas that are less socialist than those of the right wing opposition FIDESZ. One could call this the normal topsy-turveydom of East European politics if one did not see certain similarities with West European, specifically British, politics.

Gyurcsány is entertainingly honest (famously so, if people will recall his most unpolitician-like admission of lying all the time) and agrees that if there is an election tomorrow his party will lose. As a matter of fact it will probably lose next week as well.

On the other hand, the high taxation and certain austerity measures that he has introduced were dictated by the shockingly high budget deficit he inherited from his predecessor, the Socialist Péter Medgyessy, he, who had worked for the secret police, reporting on his colleagues, and, before that from the FIDESZ government.

The year Gyurcsany took office, the budget deficit looked likely to surpass 11 percent of GDP. In the end, it came in at 9.2 percent as the government raised taxes substantially: Corporate tax rates were pushed up to 20 percent from 16 percent, the value-added tax on basic items rose to 20 percent from 15 percent, and payroll taxes rose to 17 percent from 13.5 percent. The highest rate of income tax is 36 percent, but when other taxes are added in, the de facto marginal tax rate becomes 57 percent on the highest earners.

Those hefty rises, arguably necessary at a time of crisis, are leading to a budget deficit that is forecast to be 6.1 percent of GDP this year.

The taxes have also dampened growth considerably. "We have had to sacrifice a significant part of our growth potential during this period," Gyurcsany acknowledged.

Goodness, you mean higher taxes stifles growth? Who would have thunk it? Quick, somebody tell Prime Minister Brown.

Seriously, though, that lack of growth will probably cause problems in the future. As Gyurcsány explains, there is a limit to what he can do in cutting government spending.

Government spending as a proportion of GDP was almost 53 percent in 2006. It is forecast to fall to 51 percent in 2007, according to the rating agency Standard & Poor's. But the prime minister, who studied economics in his university days, said there were limits to cutting spending.

"Ordinary Hungarians are complaining, saying that we have done too many things and made life much more insecure, saying we cut back spending significantly," he said.

Undoubtedly true, but what will happen when the state will no longer be able to afford to spend what it spends now, because of the low economic growth? Will he start using nationalist rhetoric? I wouldn't put it past him. After all, he did try to hijack the fiftieth anniversary of the 1956 Revolution.